Retired diplomat and well-known translator of ancient Sanskrit texts, Aditya Narayan Dhairyasheel Haksar recently released the reprint of his 2003 translation of the Jatakamala, the stories from the Buddha's previous births. He speaks to Rajat Ghai about the importance of the environment in ancient Sanskrit literature. Edited excerpts 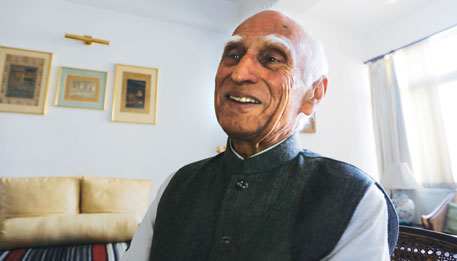 Why did you decide to translate the Jatakamala?

There are 540 Jataka tales in the Buddhist canon. While most of the stories are in Pali, some are in Sanskrit. Over the past several centuries, the Pali Jatakas have been translated into different languages and are well-known. But the Sanskrit Jatakas have remained ignored. Nearly half the stories in the Sanskrit Jatakamala are not available in the Pali canon. So I chose to translate this section of the Jatakamala. I thought people should know about it. Besides, the last time the Jatakamala was translated into English was over 100 years ago.

In how many of his births in the Jatakamala is the Buddha a non-human character?

There are 34 stories in the Sanskrit Jatakamala. In 14 of these stories, the Buddha is incarnated as an animal, a bird or a fish.

You have also translated the Panchatantra and Hitopadesa. Do these texts depict anthropomorphism?

You can put it that way. They discuss animals in terms of human qualities and vice versa. These tales have that satirical dimension to them. The Hitopadesa, the Panchatantra and the Jatakas depict animals and human beings in such a manner that they have a lasting attraction. So they have been translated into various languages and are now popular in large parts of the world.

The Jatakamala was translated into Chinese, Tibetan and Japanese more than a 1,000 years ago and those translations are still around. The Hitopadesa and Panchatantrahave been famously translated into Old Persian and through Persian, they have gone to Europe. Now scholars know that many fables that persist in Europe have their origins in the Panchatantra, so there is a connection.

Can these anthologies be classified as environmental folklore?

I would prefer not to call these anthologies environmental folklore. Instead, I would describe them as folklores with a strong environmental sense. They cover different aspects of nature but are not confined to that.

Underlying these tales is the belief that unity encompasses human as well as non-human forms. These stories display a fairly exact knowledge and understanding of environmental phenomena, of seasons, of climatic changes, of birds, beasts and vegetation. While describing animals and plants, the writers of these anthologies show a great sympathy towards them.

On many occasions, they give the impression that underlying all these phenomena is a common force which can manifest itself as human beings. So, a human being can incarnate as an animal or a plant in the next birth and vice versa.

What do these anthologies tell us about Vedic and post-Vedic society and their views on the environment?

Vedic and post-Vedic are terminologies of current discourse, which we have borrowed from the Western knowledge of India, which they call the science of Indology. This knowledge has developed only over the past 200 years or so, while environment is much more fundamental and real.

What relevance does this ancient wisdom hold for modern India where the environment is being consistently degraded for commercial gains?

One important lesson is that the environment has been there from the beginning of the creation and has been noticed and commented upon since then. It is not something which has just appeared on the scene to be discussed and debated.

Prime Minister Narendra Modi recently stirred up a debate over ancient India's scientific feats. What's your opinion on this?

I have no comments to offer on the political aspect of such claims. But I can tell you what little I have been able to discern through my readings. Certain forms of science do have a history in this country.

What is known as Arabic numerals are called Indian numerals in the Arab world. The present numerical system and decimal system originated in this country.

In surgery, we do have old scientific treatises or “samhitas” and they are named after two thinkers, Charaka and Sushruta. Though we do not have the originals of these texts, they do exist in subsequent commentaries written on them. This is because the traditional academic and scholarly practice in this part of the world was always by writing commentaries on previous texts.

Much of our knowledge system in India is based on commentaries on the original texts. And it so happens that one of the earliest commentaries which was written on these treatises was in Kashmir and it still exists. The first Indian book of medicine, Charaka Samhita exists only in the revised version made by Dhridabala in the 8th century Kashmir.

I remember being contacted by the Royal College of Surgeons in London, who were trying to reconstruct surgical techniques prescribed by Sushruta on human cadavers just to see how correct or incorrect they were. The texts included techniques for restitching severed body parts. They found that the texts were correct in that they were based on human anatomy and the persons who had written those had studied human anatomy.

Such evidence indicates that science had developed in this country a long time ago. But the fact remains that if in our literature there is a reference to a head being replaced, like in the story of Ganesha, or people flying in aeroplanes, like the Pushpaka Vimana, it does not mean that they existed but that human thinking had developed to an extent that they could imagine that such things were possible.