Amid the observance of the 550th birth anniversary of Guru Nanak, Down To Earth spoke to musician Rabbi Shergill to discuss the literary works of Sikhism's founder, especially the way nature was addressed by him. Edited excerpts:

There are allusions to various crops in Guru Nanak's bani, including barley, wheat, rice, cotton, coconut, mustard, mango, safflower, saffron, sesame and sugarcane. He was born in a mercantile caste and worked as a store-keeper for much of his youth. How do you think he gained an in-depth knowledge of agriculture?

I think we sometimes may project our own historicity on history. For instance, I don’t think the various castes and communities were quite that discrete beyond the usual taboos of exogamy and breaking bread.

Even in my own experience, I have found the shopkeepers in my own village, well-versed with the ebb and flow of seasons and agriculture. Guru Nanak’s times, I can only hypothecate, must have been even more innocent of Newtonian reductionism and much more ‘whole’ than we can imagine right now.

Historical accounts also have it that his father, Mehta Kalu, owned land and had more than one vocation. More than one historical source mentions Nanak trying out shepherding, shop-keeping, book-keeping and farming. The last one also became his ultimate profession upon settling down in Kartarpur. We can only speculate as to why but I think Guru Nanak must have loved it the most. 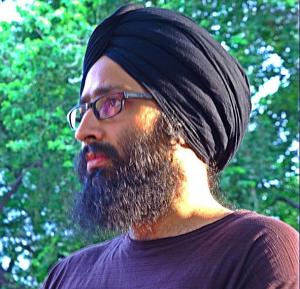 He mentions an astonishing number of domestic and wild animals, birds and insects. To what do we ascribe this?

From the little exegeses (critical explanation or interpretation of a text, especially of scripture) I have read, a lot of Guru Nanak’s bani has specific circumstantial contexts: a question from a bhakt, a unique instance, a chance meeting with an errant person or a loving Sikh, etc. It is not recited in a vacuum.

He refers to Indian, Persian and Arabic cosmology almost seamlessly. It is very spontaneous.

As to how these encyclopaedic references occur, again the answer is a fork in the road: It is either via modes of conventional transference of knowledge or non-linear noetic ones. There are arguments for both. I personally feel there are more chances it is the latter.

Take for instance the inspired recitation of Patti, an altogether singular exegesis of the alphabet itself, that too at the age of seven.

By the way, the loss of our oral body of scriptural and cultural heritage since the tyranny of writing has been imposed is monumental.

During a dialogue with Shaikh Sajjan, a highwayman, he said:

(My body is like the Semul tree; seeing me, other people are fooled.

Its fruits are useless just like the qualities of my body)

Did he usually talk in metaphors and similes?

He employs them both and more! One of the implications in Austrian philosopher Ludwig Wittgenstein’s work is that we are essentially consonants and syllables holding a human shape. No wonder then that DMT users report entering an altered realm where the two rush to greet us.

The Semul tree reference again illustrates how Guru Nanak marshals the data in his environs and weaves it into poetry to gain his audiences’ attention, the sweetest pill it has no defence against and deploys it to reset its moral compass.

The Semul tree as you may know is everywhere in Delhi. You can spot dozens in Lodhi Garden alone. Sajjan, a Delhiite, must have grown with them. Guru Nanak uses this fact to open a window in the thug’s being. That is quintessential Nanak. Right there is a clear example of how he charges words with a life-changing amplitude.

What are the themes he explored through examples of plants, animals and other things associated to the environment?

Guru Nanak’s main message is a simple one: Behold the Lord. Having said that, you could insert almost any school of Indian philosophy and reformist current therein.

I get the feeling that Guru Nanak both, doffs the hat to traditional beliefs of society and shows it the mirror as and when he deems the situation demands it. His ultimate calling is to deliver us.

Among his compositions — Japji Sahib, Asa Di Vaar, Sidh Gosht, Baramaha Tukhari and Dakhani Onkar, which one do you think captures the landscape that he grew up in (of the Punjab) the most?

I don’t think there’s any specific bani where the landscape emerges into the forefront. In most of his banis, I feel more the contours of his contemporaneous society than its landscape.

But you can get a fair sense of it when considering his bani as a whole. Of the above mentioned, maybe Baramaha but it is more to the do with the weather and it is fairly generic for the whole of north if not all India.

He painted a vivid landscape of Punjab, which today lies destroyed on both sides of the Radcliffe Line. It is said the Indian side will turn a desert in 25 years. Can Punjab's landscape be reinstated to what it was then?

Outer nature is but a reflection of inner nature. Punjab’s landscape, lies as mauled and mangled as its psyche. One cannot be redeemed without the other.

Also, we need to let go of the rose-tinted glasses we put on to look at the past. There was no golden age. At no point did the people say, ‘Wow! This is dope. How perfect is everything!’ It’s just a feel-good story we tell ourselves.

We are the same people that slaughtered a million of us, all but a mere 70 years ago. Has all that animus just flaked off? It would be foolhardy to think so.

We need to approach rapprochement with caution lest we be heartbroken later. We need to dive deep into our own history to retrieve pearls that can light our future in an evolutionary fashion and not an antiquarian one.

And we mustn’t stop at Guru Nanak, we should go back to the king-less Harappa and Mohenjodaro, even all the way back to the first settlement in South Asia — Mehrgarh.

We first need to discover the simple, reflective, inner world which, in turn, can only be discovered if we rediscover Punjabi, the link between us and this land. We have wilfully forgotten names of all the elements of the ecosystem that we’ve known for millennia only to replace them impersonal Latin nomenclature.

We have deliberately become strangers to the land. That must change. Punjab’s ecology and topology are not a little linked to its phraseology. There's also the small matter of hyper-capitalism imposed on a contemplative civilisation. What we need today is discourse.