Vadodara-based artist Taniya Vaidya recently exhibited her collection of paintings at New Delhi’s India International Centre. She mainly uses natural dyes—mostly plant-based ones like indigo, madder and harda. She talks to Down To Earth about themes in her current works, the use of natural dyes in India and the problems faced by traditional artisans using such dyes. 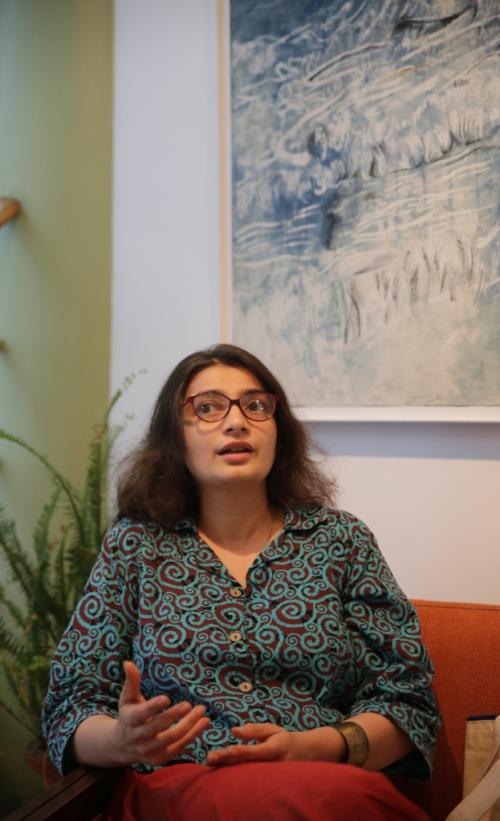 Two of your paintings—“The Waterfall” and “Reverie-3” have the landscape and a single protagonist—a woman—in complete harmony with each other. In an earlier interview, you have said that “for me, this woman is a free-spirited revolutionary, an environmentalist, someone protecting the environment, who is looking for a spiritual awakening in nature”. Please explain this curious mix of female-centrism and love for nature.

This particular body of work is based on themes found in the works of Rabindranath Tagore (pre-Independence) and Bimal Roy (post-Independence). Both feature women who have either been forced by prevailing social circumstance (the ongoing freedom struggle) or by their inner self to venture out from the confines of their homes, into the landscape. Tagore’s poetry especially features a singular female protagonist, who is at home in the landscape. There is also the example of Mirabai, the Saguna Bhakti poet. She left the comforts of royal life to wander across India, a true free spirit of sorts. She describes the landscape that she moved in her poetry. This freedom to move without any fear—that was my singular inspiration in making these works.

You have trained with traditional craftspeople all over India. What sort of problems do they face in today’s rapidly industrialising and modernising landscape?

The craftspeople I worked with, had a ready market. They also had a lot of support from both the government as well as private agencies. Their children were also willing to continue in their footsteps. Their concerns were more environmental in nature. For instance, the water sources they relied on, kept on getting polluted. Industries had started encroaching upon the areas where they used to work. The other problem they face is with regard to the ingredients that they use in their work, viz. natural dyes. Indigo, Majit (Madder) and Harda have to be cultivated and have become very expensive. Part of the problem lies in the fact that there are middlemen involved in the whole process of making these dyes available from the farm to the market. A craftsperson specializing in natural dyes must have trustworthy contacts who can deliver the dyes to him, without deceiving him.Sometimes, the craftspeople are forced to use synthetic dyes as substitutes to natural ones as these are not economically viable.

You have used a dye like indigo which is so deeply connected to India’s freedom struggle. Indigo and other dyes like paubrasil, cochineal and logwood were traded extensively during colonial times. Was using indigo a conscious attempt to highlight the long history of colonial evils?

No. I initially began using indigo since I wanted to use an eco-friendly blue dye. It was only later that I was introduced to the whole historical context to it. The ancient Greeks called this dye “Indikos” since it grew around the Indus River and the land where it grew was thus named India. Also, the production of dyes like indigo and madder as well as textiles coloured with them had made India a sought-after trade destination in the ancient as well as medieval world. This led to Europe wanting to colonise India. Later, during the freedom struggle, indigo again played a role. It is usually grown as an accompanying crop. But in their greed to export large quantities of the dye, the British forced Indian farmers to grow only indigo. This led to the Champaran Satyagraha by Mahatma Gandhi, which kickstarted the freedom movement. Hence, indigo played a role in both enslaving and freeing India. It is only later that I got to know all this. But now that I know it, I actively promote my indigo paintings with this background in mind.

What is your take on the “synthetic dyes vs natural dyes” debate?

For industries to use madder and indigo on a mass scale is not economically or environmentally feasible. We can mass produce these dyes by growing them on a large scale. But then, that process would involve using an equally humongous amount of water and land, which are too precious in today’s day and age. I think the onus is on science and industry to see to it that some substitute is found which though it may not be natural, would not be harmful like synthetic dyes. The National Innovation Foundation in Ahmedabad is currently working on developing microbial dyes. Industries too have to think out-of-the-box to develop ecologically sensitive dyes.

How popular are nature and the environment as themes for Indian artists today?

Unfortunately, nature and the environment are not in vogue as issues in contemporary Indian art. Most of it features themes related to cutting edge issues like wars and conflicts. How can we make artists focus more on these issues? Well, they have to realise that wars happen because humans and nature are in conflict. Because many people do not get access to their due share of natural resources. Artists cannot be blind to such issues.

What are your future projects going to be on?

I will continue to work with natural dyes.