Environmental geologist K S Valdiya lives in Uttarakhand and keeps a tab on the changing geological processes in the Himalayan region. He was recently conferred with the G M Modi Award for Innovative Science and Technology for his contribution in the fields of Himalayan geology and neotectonics. Formerly a member of the prime minister’s science advisory council, Valdiya tells Anupam Chakravartty what triggered the recent landslide in Uttarkashi 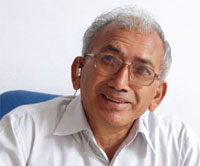 Flash floods are becoming recurrent in the Himalaya as well as in other parts of India. What are the geological processes that could trigger them?

Flash floods have little to do with geology. They are related to the rainfall pattern that has changed considerably over the years due to warming up of the atmosphere. There has been evidence that with increasing atmospheric temperature, precipitation during the rainy season is no longer uniform. In summers there is prolonged drought followed by short spells of heavy rainfall. So quick and vast is the rate of precipitation that there is not enough time for water to percolate down the soil. To worsen the situation, there is hardly any tree cover; soil is compacted to the extent that it becomes impermeable. This results in increased river discharge and flash floods.

Could this be the only cause behind the flash flood in Uttarkashi in August that the government termed the worst in 30 years?

It is entirely man-made. A river consists of a deep channel, flanked by floodways on either sides, which are extended by floodplains. Historically, people avoided floodways for building houses and only did agriculture there. But decades of human activities have destroyed the geomorphic difference between floodplains and floodways. Now, there is construction work not only on floodway, but also close to the river channel. Unlike railway lines and bridges which span the floodways, roads and bridges get easily washed away because developers are least concerned about geological structures. 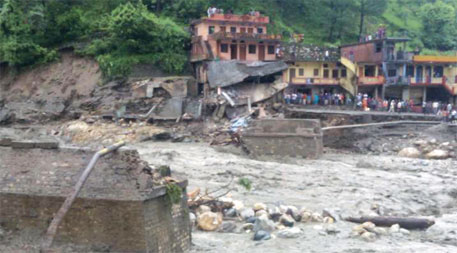 First, they restrict the channel by erecting piers on it. Then, they build embankments on both sides of the river to reach from the bank. The embankments act as dams, whereas the bridges resemble open sluice gates. In mountainous regions, the developers simply construct culverts or sometimes holes to save cost. In Uttarkashi, all the construction including roads and bridges has come up on floodways and terraces. All the new townships coming up on the riverside are on the floodways. So when a river is in spate, what does it do?

Do you think increasing pressure on land in the mountain region is also the reason for devastating flash floods?

Of course, there is pressure on land. But you will not find village residents building houses on river terraces. They prefer building on the slope. Faulty planning is responsible for such landslides. In the Himalayan region, it is a standard practice to build a road on the debris of previous landslides. This saves the cost of digging or cutting the mountain. So good engineers put pressure on road contractors to build drainage system parallel to the road. But many do not have such a drainage system for the water to flow down. This causes more landslides.