I learned the language without references

Pramod Kumar researches a language spoken by only 273 people in the Andaman islands. A PhD candidate at Jawaharlal Nehru University in Delhi, he spoke to Sumana Narayanan about the Jarawa community and its language. Excerpts 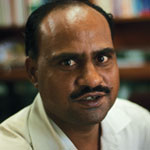 On how the project began

In 2001, Anvita Abbi, a professor at JNU (Jawaharlal Nehru University), was working on a project with the Max Planck Institute to study the languages spoken by the settler communities in the Andamans. I was a researcher with the project. That is when I first met the Jarawas. No research had been done on the Jarawa language before this, and I decided to take up the challenge. With a fellowship from Max Planck Institute, I did fieldwork in the Andamans from 2003 to 2007. I am about to submit my thesis.

On the Jarawas’ reaction towards him

The Jarawas accepted me without any problem. Since I met them through government officials, they clubbed me with them. But the local administration made life a bit difficult. Early in the project, I had trouble getting permission. It took a lot of phone calls to the home secretary from Anvita Abbi and JNU’s vice-chancellor before permission to visit the Jarawa reserve was given.

On learning the language

The use of the language is restricted to the community, so I had to learn it without any reference. For the first two months I just accustomed myself to the sounds of their language. Slowly, I began to figure out some words using pictures or by pointing to objects. Sometimes if they misinterpreted my question, I would ask the question again when they would be carrying out a related activity. For example, if someone was running, I would ask what he was doing and try and get the word for running. Then I would try to use the word in a different scenario to double check and confirm the meaning.

On the Jarawa history

The Jarawas are actually the same people as the Onge. They, in fact, call themselves Ang. So do the Onge but the British heard it as ‘onge’. Even their languages are almost identical and the slight variations could be because they have been separated for the past 200 years.

There have been suggestions that Jarawa belongs to the Proto- Austronesian group of languages. These are spoken by the indigenous peoples of the Pacific islands. Jarawa is not related to any of the Indian languages. It does not have a script, which is not surprising because only five per cent of the languages in the world have a script.

On the characteristics of the Jarawa language

In her paper published in Oceanic Linguistics, Juliette Blevins has used only sound systems (presence or absence of sounds like ‘pa’, for example) to classify Jarawa as a Proto-Austranesian language. There are many ways of classifying languages—based on cognates (words with similar meaning and sound like father and pater) or by syntax. Going by the syntax, Jarawa is an SOV (subject-object-verb) language—the subject comes before the object and the verb comes after the object.

According to my study, Jarawa is an agglutinative language, where there is a clear demarcation of the suffix/prefix attached to a verb. Another characteristic of Jarawa is that the noun comes before the adjective. Jarawa does not differentiate between tenses. One understands the tense from the context.

On the influence of outsiders

Younger members of the community are familiar with a few Hindi words and use them to converse with outsiders. Their interaction with outsiders has been limited to posing for photographs in return for food and gifts. The Jarawa do not mind interacting with the world outside the forest, but they don’t realise the risk involved in this. Some of them started consuming tobacco and alcohol out of curiosity and now are addicted to them. They do not even understand the value of money. A note of Rs 10 or of Rs 1,000 is the same for them. Someone once bought a samosa for Rs 100.

On the impact his research could have

Hopefully, my work will help them understand the positive and the negative ways in which the outside world can impact them. I would love to work with them again but I doubt if I would get the permission.