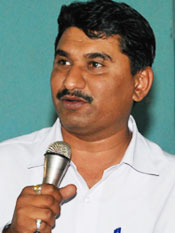 Amit Jethwa was born in Khamba village of Amreli district in Saurashtra. He worked with a government hospital as a pharmacist but later he made the same region his work place and took up issues of environmental law and wildlife protection issues in Gir Sanctuary along with the community.

Four years ago we conducted Dariya Kinara Samvaad Yatra. I was part of it and we went to this region too. People told us that Dinu Bhai Solanki, who is the Member of Parliament from Junagarh, had a big stake in mining in the area apart from many other people who are exploiting their political contacts to continue illegal mining there. The government recently initiated action against him and even served Dinu Bhai a show-cause notice for imposing a penalty of RS 41 lakhs on him.

We have never heard of any suhc case in Gujarat before this but we have an RTI helpline on which we have recieved 5-6 complains about pressure and even reports of attack on activists from whose RTI application, corruption was revealed at block level or district level. We advised them to file a complaint with the police and the state infomation commissioner under Section 18 (of the RTI Act). But this is the first case of its kind and its very unfortunate.

It is impossible as of date to raise a voice against coastal mining in Gujarat. However, people who don’t want to give their fields under which there is limestone reserve, then they are pressurized and threatened.

His accomplishment in terms of RTI was that he filed a petiton in HC for appointing one more Information Commissioner as there was only one earlier. Because of this, there was a huge backlog of second appeals under RTI. The government was pressurized by this petition and 2 more commissioners were appointed because of which the process has accelarated a bit. Many positive changes in Gujarat state RTI rules also came after his intervention. In March this year, many old rules were repealed. Now there are more options for filing RTIs and paying its fees. People can even file RTI by putting a revenue stamp now which is possible in every village.