"Lessons in waste disposal from Lahore"

Ata-Ul-Haq is CEO of Green Technology Environmental Corporation, which set up Pakistan's first mega composting plant in Lahore in 2006. He tells Arnab Pratim Dutta that the model adopted for the plant can be replicated across South Asia 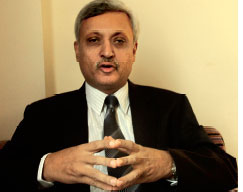 Why a composting plant for Lahore?

Getting this plant up and running took about five years. A Supreme Court-appointed committee considered several options to deal with Lahore's waste, including converting it to energy, and recommended a composting unit. The waste-to-energy option was rejected because the committee felt it imposed a double burden: people are charged for garbage disposal as well as for the electricity generated from the waste.

The Lahore Compost Model has turned out to be a technically successful one and I think it has lessons in waste disposal for all saarc nations. Roughly the same type of waste is generated across the region, and collection practices and the functioning of municipalities are also similar. India has an edge since composting has been practised in your country for years. Using compost from cities can stem the depletion of organic content of soils in the saarc region.

What about biomethanation plants, ones that use microbes to produce methane from organic waste and use the methane to produce electricity?

You must take lessons from the failure of the biomethanation plant in Lucknow. The plant was shut down in 2005 and its operators decamped without paying workers. Biomethanation plants have a great disadvantage: methane content of the gas they produce is 55 per cent. But powerhouses require gas with 95 per cent methane.

Is incineration an option?

No. Let me cite an Indian experience again. An incineration-based waste-to-energy plant in Delhi was abandoned in the 1980s because it could not get waste of the requisite quality: all systems in the unit got jammed because the waste was not combustible. Of course, in developed countries like Japan municipal solid waste is incinerated everyday. But today even these countries are upgrading their incinerators because of emission problems.

Tell us a little about operating model of the Lahore Compost Plant.

It is a public-private partnership project: the Lahore municipality has given us the land and the plant gets the waste free of cost. Green Technology Environment Corporation looks after the operation of the plant. Every day around 1,000 tonnes are brought to the plant from largely low- and middle-income residential areas. Each truck is assigned a locality from where it's supposed to collect waste. If a truck doesn't bring waste, the municipality is alerted about the area from which waste has not been collected.

Is the model sustainable?

Absolutely. When a company invests in a us $5-million project, it does some homework about recovering the amount. Carbon credits today give the private sector the confidence to invest in green technologies. We have not got any credits as yet, but the World Bank has committed us $11 million.

How is the waste segregated?

That is our weakness. We do not expect local communities to have the capacity to segregate waste efficiently for the next five years at least. So, segregation has to be done at the plant. We hope to have additional equipment by early next year; that will ensure better segregation. About 20 to 30 per cent of the waste is currently segregated; we hope to scale that up to 70 per cent. But even today, the quality of compost at our plant is slightly ahead of Indian standards.

What we must also understand is that we are using urban waste and not green garden waste like the ones used by plants in developed nations. Hence European and American standards do not apply to us. saarc countries must develop their own standards keeping in mind their requirement and demands.

Has your plant faced the problem of hazardous waste contaminating the compost?

Not really. In our part of the world, toxic waste like batteries are sold for recycling. Hospital waste does not come to our plant but goes to hospital incinerators. And an agreement with the government ensures that we don't get industrial waste. The level of heavy metals in the compost produced at our plant is within normal levels. That indicates we are not using industrial waste.