The Adani Group's US$ 16.5 billion Carmichael coal mine project in Queensland is mired in a controversy as it not only threatens the Great Barrier Reef, but also the livelihoods of local communities. Even as the Australian government and the company are struggling to seal the deal, Rajat Ghai speaks to business leader Geoff Cousins, marine conservationist Imogen Zethoven, reef tourism operator Lindsay Simpson and a Queensland farmer, Bruce Currie, who recently visited India to voice their protest 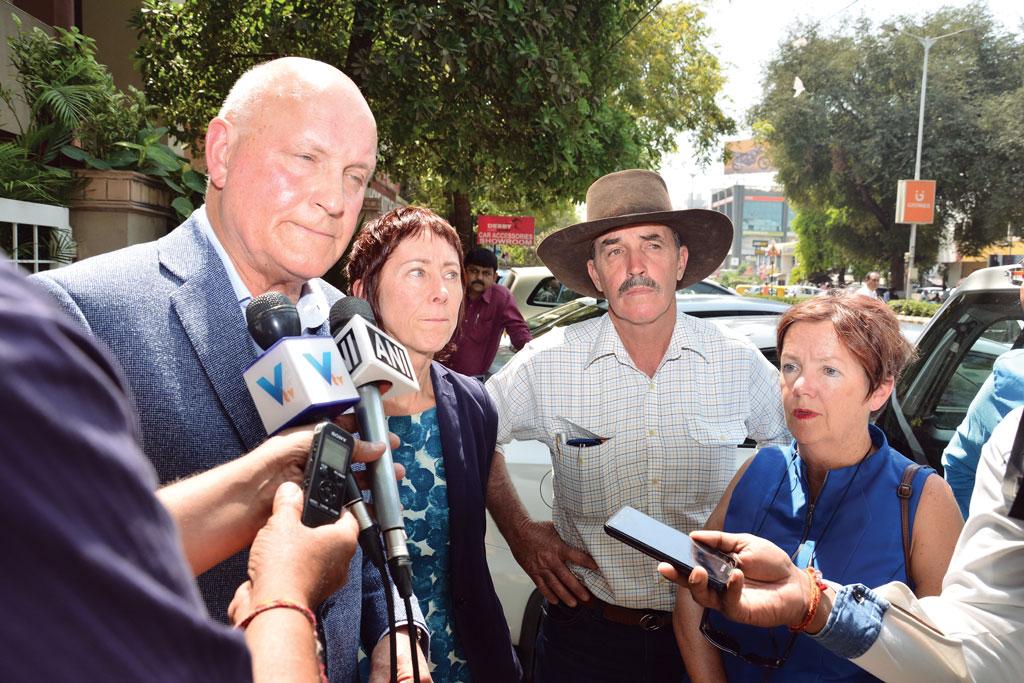 Why are you objecting to the Adani Carmichael Project that will generate jobs besides pumping money into the Australian economy?

GEOFF COUSINS: These will be short-lived jobs. The Great Barrier Reef is forever. So to put to risk one of the great natural wonders of the world for a small number of short-term jobs is unconscionable. Our survey shows that 70 per cent of Austra lians do not want Adani to construct the mine but want Adani to invest in renewable energy (Adani is planning a solar project, also in Queensland). We are not against a particular company, but against the concept of increasing the risk of damage to the Great Barrier Reef .

Developed nations have been using fossil fuels to grow, but when it is India's turn, climate change is being cited.

GEOFF COUSINS: Why would you want to invest in a 19th century technology when you can invest in new technologies such as solar power? To me, the answer lies in building big solar installations in local communities and then a tiny little network to distribute power from these plants. And the technology is developing at such an incredible pace that by the time India gets around to this expansion, you will have gained huge benefits. Don’t put your money into an outdated, dirty, polluting technology. Go straight for the new, clean energy.

How will this project affect local aquifers in the area as well as inland farming in Australia?

BRUCE CURRIE: The Adani coal project is located in what is called the Galilee Basin. If the mine goes ahead, the danger is that it will open up more mines and accelerate the destruction of the basin. The Galilee Basin is very important for feeding water supplies into the Great Artesian Basin. If we lose our Great Artesian Basin waters, inhabitants of 23 per cent of Australia's population will lose their livelihoods. The livelihoods of those who depend on the water will be jeopardised.

You have said in an open letter to the Adani Group that the Queensland and federal governments have stripped farmers of appeal rights to fast track the Carmichael mine. Please explain.

BRUCE CURRIE: The last state government in Queensland gave mining companies exemption from accountability by granting them statutory water rights. There were no restrictions on coal firms. So, regardless of what the impacts might be on the Great Artesian Basin or the surrounding areas, the mines have the right to unlimited groundwater. On the other hand, if a farmer had to access water, he had to get permission by way of a licence and had to pay for the water if it was to be used for a small-scale agricultural operation. Coal mines are polluting surface and groundwater with impunity.

How will the mine sound a death-knell for the Great Barrier Reef?

IMOGEN ZETHOVEN: The mine will require a new terminal to be built because the existing port, which is also owned by Adani, is not big enough for the scale of the mine. Construction of that terminal (at Abbot Point coal port) would require dred ging 1.1 million cubic metres of the seafloor. That’s inside the Great Barrier Reef Heritage Area. That area is home to many threatened species like the snubfin dolphin, the Irrawaddy dolphin and turtles. The port’s development would lead to many more ships ploughing through the reef’s waters. This would increase the chances of groundings, collisions and spills. These are the mine's direct impact.

But the indirect impacts are far greater. Sixty million tonnes of coal a year being burnt for 60 years will dramatically accelerate climate change. In turn, this will accelerate the warming of the ocean, coral reefs, including the Great Barrier Reef. Last year, 22 per cent of the corals in the Great Barrier Reef died due to heat stress, and this year, the reef has experienced another severe bleaching event. We do not yet know how many of the corals have died this year.

How would the mine affect wild species?

IMOGEN ZETHOVEN: In 2015, when the then-federal environment minister, Greg Hunt, was addressing the impacts of this mine, he did not take account of the impacts on two species—the Yakka Skink and the Ornamental Snake. And so, he was challenged in the court by a local environmental group, the Mackay Conservation Group. The judge found that the minister had erred in law. So the decision was set aside. He had to then make the decision all over again. Unfortunately, the outlook for these two threatened species is very poor. The same is true for the Black-Throated Finch. It is a highly endangered bird. Its critical habitat is over the coal mine. If the mine goes ahead, it will spell extinction for the species.

How would the project affect tourism in Queensland?

LINDSAY SIMPSON: The place where we take tourists to snorkel (in the Whit-sunday Islands) had already started bleaching. That is the danger the Great Barrier Reef faces. Our grandchildren might not be able to see what we are seeing. And this is for just 1,400 jobs.

GEOFF COUSINS: India and Australia have had a very good relationship, and yes, to some degree that is based on sport; cricket obviously being particularly important. Two former Australian cricket captains, Ian and Greg Chappell, have signed that letter we gave to Adani. But it is not just about sport. There are many Indian families who live in Australia and are a very important part of our community. But above that, there are many Indian students studying in Australian universities. And over the years, that too has helped to create a palpable relationship between the two countries. We are concerned that the opposition to this mine is so strong—we believe it is stronger than any other campaign that has run against a major project in Australia—that if that persists, there will be damage to the image of your country in our country. And that will be tragic.

The letter also says that the government is changing the Native Land Title Laws to fast track the mine.

IMOGEN ZETHOVEN: Adani started talking to the traditional owners of the land on which the proposed Carmichael mine is planned for construction—the Wangan and Jagalingou people. Some of the traditional owners agreed to sign an Indi-genous Land Use Agreement with Adani, but others did not. Those are the ones who are strongly opposing the mine, which they believe will destroy their environment and cultural heritage.

A traditional owner, Adrian Burra-gubba, who is representing the Wangan and Jagalingou Family Council, lodged an appeal against the Queensland government, the National Native Title Tribunal and Adani after the tribunal allowed the Queensland government to issue a mining lease to Adani for the proposed site. The case is being heard by the full bench of the federal court.

In 2006-8, in a separate case in the state of Western Australia concerning the Noongar people, not all members of the tribe signed an Indigenous Land Use Agreement for a similar project. Those who did not sign the agreement challenged the decision in the federal court. The court ruled that unless all traditional owners sign the agreement, it is not valid. That was a phenomenal decision.

However, the Australian government has taken a position that it will amend the law—the Native Title Act—to specifically allow agreements between traditional owners and companies to be deemed valid even if some traditional owners refuse to sign an Indigenous Land Use Agreement. This is an outrageous course of action, and many Aboriginal people, including the Wangan, the Jagalingou and the Noongar, are pushing hard to ensure that their rights and interests are respected by the federal parliament. Right now, it appears that when you get a court win, the government subverts it by a major legislation to keep such “development works” going. But ultimately, civil society will stop such projects.

GEOFF COUSINS: During our trip to India, we observed that Adani’s treatment of indigenous people in this country is very poor. They have made promises which they have not kept. We have seen examples of fishing groups where promises of employment, compensation and access to the ocean have not been kept, and that people’s livelihoods have been affected. During our trip to India, we found that this company cannot be trusted and does not keep the promises it makes.

Would you ascribe any motives to the federal government or the courts in the way they are handling the Adani Carmichael coal mine and port?

IMOGEN ZETHOVEN: We never ascribe any motives. We can only comment on what the federal government does. It is all about the environment and respecting the rights of Australia’s indigenous people, protecting the reef and groundwater. This is not a project that should go ahead. That is our bottom line.

Yes, jobs are important, but our focus is on the 70,000 tourism jobs that depend on a healthy Great Barrier Reef which will be threatened if this project goes ahead. There are other ways to create jobs. For example, renewable energy, tourism and education.

GEOFF COUSINS: It is important for Adani to understand that the way Australia works is very different. They may imagine that if you get government licences, you can go ahead. That is not the way it works in our country. Yes, you need a government licence. But more importantly, you need a social licence. There are other significant examples where projects, which were much bigger than the Adani Carmichael mine, were stopped even though they had approval from both—the federal and state governments. And they were stopped through the power of the people.

LINDSAY SIMPSON: I confronted the premier of Queensland when she was here and told her that she was single-handedly responsible along with other levels of government for destroying the reef. That she will not go down in history for creating jobs for Queensland. The government will have blood on their hands if this mine goes ahead.

Now that you have been dismissed by both your government and Adani, what will you do?

GEOFF COUSINS: The next step will be the start of the biggest environmental campaign in the history of Australia. It will be a powerful demonstration of the power of the people. As the Great Barrier Reef is at risk, so is Adani's business, if he decides to proceed with this mine.