Shift grain bowl status from North to other regions of India

Balwinder Singh Sidhu, agriculture commissioner and chief conservator of soils in Punjab, is known for giving his opinion in a frank and forthright manner. He has ruffled many feathers in the political establishment of Punjab and in Krishi Bhawan, the agriculture ministry's central office in Delhi. But this doesn’t stop this gold medallist water engineer from Roorkee University from apprising his bosses of ground realities. With just three years more in service, Sidhu has only one aim—to leave a legacy of at least a water-sufficient Punjab, if not surplus. In an interview to Jyotika Sood, he talks about challenges with India’s food bowl states—Punjab and Haryana. Excerpts: 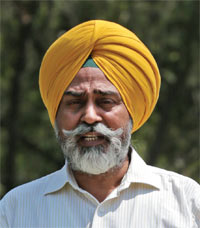 What are the reasons for this acute water distress in Punjab and Haryana?
After green revolution when India became self-sufficient in food grains, successive governments still focused on cereals like wheat and rice. Since Punjab and Haryana were the food bowls, they were always looked at to meet the country’s need. Farmers shifted from productive to intensive agriculture. So a kind of pressure was created to outperform earlier achievements and these expectations were coming at the cost of water and soil, which the state governments and the Centre were reluctant to acknowledge. By the time alarm bells were rung and political establishment began to act, it was too late. The result is in front of everyone.

But even farmers need to be blamed for this. They have been using water carelessly?
To a little extent, but not completely. You have to understand their environment too. The farmers in Punjab and Haryana witnessed prosperity during Green Revolution and it was the government which introduced farmers to rice and dwarfed wheat as a commercial crop. The crop gave them assured income through the introduced price regime of minimum support price (MSP), at which the Central government procures foodgrains from farmers. They turned their farms into grain churning machines, exploiting ground water and soil. The government encouraged and they kept working. Nobody thought of sustainability in the long run.

Now, at a time when farming profit margins are going down due to increase in input costs and weather vagaries getting intense, breaking this MSP psychology of farmer is getting tougher. They have been in this MSP-psychology for over four decades and it is not easy to convince them to divert to other crops where you don’t have MSP. That is why crop diversification programmes are not finding much success.

What do you see as the way forward?
Policy intervention and good price remuneration with assured market for alternative crops to wheat and rice is the only key. Though every state government has its own agricultural policy, it is largely the Central government benefits and policies which define a state’s focus. The need of the hour is to divert dependence from foodgrains and diversify to other crops, especially pulses and horticulture. Even focusing on ethanol can be quite rewarding for the farmers as well as the government, but the government is not ready to support it. Alternatives for wheat and rice have to be either at par or more in terms of price and profits. That’s the only way farmers would diversify.

What kind of crop diversification is required for farmers in Punjab and Haryana?
For farmers to shift from paddy to low water requiring crops, efforts need to be made to ensure the efficient purchase of the alternate crops at MSP. The MSP should ensure the economic price parity so that farmers do not have any economic disadvantage. Amendment to APMC Act to ensure private participation marketing of high value crops like fruits and vegetables. Post harvest handling infrastructure for perishable commodities. And last of all, intensify research in crop productivity improvement

What about water conservation?
Water or no water is in our hands. It is a crisis of governance and for a new vision of water there is a need for changing the approach to water management, responsive political leadership on water and everybody needs to understand that water is everybody’s concern.