Nuchem is a company in Delhi that develops and sells water/effluent treatment technologies, chemicals and laminated panels. Sudev Barar, its owner, has adopted a Linux-based open-source computing environment. He tells Sopan Joshi why it makes sense for industry to adopt open-source software 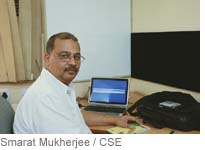 On adoption of computers
I joined the family business in the early 1980s, when the personal computer (pc) revolution had begun. I remember buying a product called pc Junior, with 64 kilobytes of memory and two floppy drives, for Rs 80,000 in 1985. We found the computer very useful for accounting jobs. Billing accuracy was an attraction.

On learning to handle computers
I had no formal training. But as a manager who had expections from operations, I was interested in what computers offered.I remember the joy of seeing the ibm xt, perhaps the first with an internal hard disk drive of 10 megabytes-- felt like heaven after using so many floppies.

On software requirements
In the early 1980s, the concept of licensed software just wasn't there. pc dos could be freely copied. In 1992, we set up a new plant and started using Oracle software--that's when we came to terms with licensed software. At that time, Microsoft Windows 3.11, a point-and-click operating system, had made computers very easy to use. Then came Microsoft Windows 95. Software licence costs went through the roof. We'd exhausted our software licence budget. By the late 1990s, computer viruses had also become common, and that meant investments in anti-virus programmes.

On hardware requirements
More versatile and complex software needed expensive hardware. So, apart from the investment in software licences, we were looking at increasing hardware costs. We needed an it overhaul, and were looking at an investment between Rs 60-70 lakh. We wanted to get out of the software-hardware trap, but did not want to use pirated software.

On early brushes with open-source
Linux-based operating systems were available in the mid-1990s. They worked well for servers and eliminated the risk of computer viruses. But it wasn't apt for businesses--for example, its graphical user interface would crash regularly. Even if the operating system worked, there were no software applications to get the work done. So we stayed with dos till 2000, when it seemed Linux had improved. We decided to try it out.

On preparing the switchover
Our it staff started experimenting with Linux to see if we could use old hardware --set it up on a network with a powerful server-type central computer operating the system and the software, and terminals at the user-end comprising old machines with low power. The computing happened at the server, and terminals handled only local display and commands. With Linux distributions like Ubuntu, open-source's graphical user interface has improved a lot. You don't have to be a geek to use Linux.

On the switchover
Linux operating systems came with a basic software package, eliminating software licence fees. The challenge was to get people to move from a dos-based computer environment to a graphical interface. Ten people were trained for four weeks.They then took about six months to train 260 people in the use of Linux-based computers.

On problem-shooting
I looked for solutions in computer magazines and--critically--the community of Linux software developers.I was familiar with the culture of mailing lists and Internet forums. It is a give and take. If I was at level one of understanding, I would get help from those at level two, provided I helped those at level zero. It's not like in licensed software where you call up and demand service without learning what the problem is. It's surprising how fast you get solutions--sometimes in minutes, and better than any response from commercial vendors.

On community support
The Linux community is spread out, and it never sleeps. People can see clearly who has the spirit of community and who is a fly-by-night visitor. Learning has to be mutual. The investment is not just monetary but also in terms of time spent to develop solutions.

On savings
We are out of the vicious cycle of buying new software and then buying new hardware to run it. Our savings in terms of software and hardware have been around Rs 60 lakh. We're yet to throw away a single Pentium I machine, and the system is working really fast. And we don't use pirated software. There are proprietary software for Linux systems, but many of these are cheaper than proprietary versions of the same software.