The Telangana Joint Action Committee (TJAC) has been at the forefront of the demand for a separate Telangana state. Its chairperson M Kodandaram speaks to M Suchitra on why only a separate state will satisfy people of the region 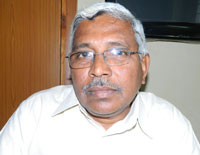 The general strike in Telangana region including Hyderabad, has now completed 25 days. It is badly affecting lives of common people. How long will the strike continue?

We cannot call off the strike till the Centre announces the formation of a separate Telangana state. It was the last option we wanted to resort to. But we were forced to because of the indifference of the Central and state governments. We had given enough time.

Consultations are on at the Centre. Do you have any idea what the outcome could be?

No clue at all. But two things are very clear. The Centre wants to take a decision at the earliest; when we met the prime minister he told us that he recognises the urgency of the situation. Secondly, now they know status quo cannot be continued. There is also growing realisation that packages and regional committees won’t work. My feeling is that at this stage the Centre will not drag on taking a decision. But no one knows what is in their mind.

What will happen if the Centre comes up with a statement that they are going to start the process for a separate state and then take a U-turn as happened in 2009?

I don’t think they will dare to do that this time. After that experience, now they openly say that they don’t want to take a decision that cannot be implemented. They are trying to create an impression that no one should be a loser and everybody should gain from the decision, whatever it may be. Political consultations are going on. We don’t know what will happen once the decision is announced.

What if the Centre decides to appoint another committee?

In that case, we’ll intensify our agitation. We will reject any decision other than bifurcation of the state.

The Srikrishna Committee report is with the Centre. The committee has not recommended bifurcation of the state as the most desirable option. What do you have to say?

The committee has made it very clear that status quo cannot be maintained. Andhra Pradesh in the present form cannot be continued. The committee says that in the given situation, regional commissions for the development of Telangana region while keeping the state united is the best option. If that is not workable, then the state should be divided. However, the division of the state must be done taking every stakeholder into confidence and consideration.

Why not go for the option of regional commissions?

It’s very difficult to sell this idea to the people of Telangana because it is already a tested and failed experiment. We had such regional committees for Telangana earlier, formed somewhere in 1958 and continued up to 1976. Having fought for separate Telangana for the past 50 years, people now strongly feel regional committees will not work. Only a separate state will satisfy people.

Till recently, the main slogan was the backwardness of Telangana. But now it’s self-rule. What made you to shift the focus?

There is no shift at all. During the merger with Andhra in 1956, Telangana lost control over its resources. These resources are now controlled, deployed and utilised by elites from other regions for their benefit. People in Telangana cannot utilise their resources. They feel they have been subjected to internal colonisation by elites from Andhra and Rayalaseema. An internal colony loses three things: one, its cultural identity; two, its resources, and three, power to rule its own territory. This is not a fight for its share in the development. The fight for Telangana is to regain control over its resources and restore the cultural identity. People very well know this is possible only through self-rule.

But looting of people’s resource takes place in coastal Andhra and Rayalaseema too. What do you have to say?

In Rayalaseema, it’s the regional faction leaders who control over the resource. In coastal Andhra, it’s the regional capitalist classes. Every where in India we can see  a handful of people who are exercising control over the entire  resources denying access and fruits of development to ordinary people. But struggles against this take different forms in different parts. In the case of Telangana, the struggle is for a separate state and self-rule. Because, here, elites migrated from other regions take away resources by virtue of their control over  government machinery and the political system in general. The struggle for Telangana is essentially a challenge against the existing forms of development. People want alternative forms of development models where every citizen benefits. They feel it’s possible only if they have a separate state where their livelihood opportunities and economic situation will improve.

Chhattisgarh was formed for the welfare of the tribes. But they did not benefit much from the new state. What do you have to say?

I don’t think Chhattisgarh was formed for the welfare of the tribes. There had been no widespread struggle for a separate state as it is taking place in Telangana. There should be three dimensions to any agitation. First, propagation of the ideas; second, agitation; and third, political process. In the case of Telangana, the propagation of ideas is taking place in a very efficient way. Widespread campaigns have taken place and the message has gone to every individual. All sections of people are involved in the agitation for a separate state. This has not happened there. Also, we cannot ignore that after the formation of Chhatisgarh many things have improved. They are reviving tanks, the rate of growth of agriculture and literacy rate has increased, they have an efficient public distribution system, the infant mortality rate has decreased substantially. This has happened in Jharkhand also. And in both the regions, new leaderships are emerging from the lower rungs.

If Telangana is formed, what should be the priority of the state?

In my opinion, agriculture and revival of water bodies. These should be given top priority. The moment you revive tanks and agriculture, then automatically small businesses will come up and employment opportunities will increase and along with that new pattern of industrialisation should be tapped. Telangana has enormous scope for textile industry. It can give employment to hundreds of thousands of people.

Lack of water and irrigation facilities is one of the main issues highlighted by the movement. What’s the present situation?

Pathetic. Telangana had a very efficient system of tank irrigation. It has been destroyed over the years due to neglect. Today surface water is not properly stored or utilised. People are forced to depend heavily on borewells. What’s happening in Telangana is water mining. It has destroyed the top soil leading to less moisture. You cannot grow millets traditionally grown in the region. I think the only way to overcome this issue is to restore water bodies. I am referring to tanks. The irrigation models formed by the British for the plains became models for all regions. Unfortunately, these kind of irrigation projects do not work for Telangana, which is an elevated region.

What kind of irrigation system does Telangana need?

But the state government is going ahead with its mega Jalayagnam irrigation projects?

Jalayagnam is essentially a contractor-driven programme. Focus is more on the interests of the contractors, not providing proper irrigation facilities to the farmers. It follows EPR, engineering, procurement and construct. Engineers will design the projects according to the interests of the contractors. They will procure the material and construct the project. Projects are designed in a way that they get more money from the government. There is no benchmark. Contractor-bureaucrat-politician nexus is making huge profits.

Crops in Telangana region have been severely affected by the present reduction in power generation due to the general strike?

Farmers say 400,000 hectares of crops have been affected. But I think it’s all related to climate change. There’s a significant change in rain pattern. July you don’t have rains; in August, high precipitation; and in September a long dry spell. We don’t have enough to give seven hours of free power. Now they are getting only three to four hours. The government could have handled the crisis by tapping hydel and gas projects. But it is trying to put the blame on us to malign the image of Telangana struggle. Farmers are aware of the tactics of the government.

After the formation of Telangana, will there be a possibility that the real issues will get ignored?

No. There is widespread involvement of people in the agitation. They are fully aware of their rights and political dynamism. No government can fool them. If that happens, it will lead to another agitation within the new state. People will not easily yield to political pressures or money power.

•  'Development in Telangna should be participatory'
•  Centre dilly dallies on Telangana