Harsh Vardhan, who has served as Delhi health minister and is the man behind the Pulse Polio campaign, is the chief ministerial candidate of the Bharatiya Janata Party for the upcoming Delhi Assembly elections. Anupam Chakravartty caught up with the ENT surgeon to find out if environmental sustainability figures on his development agenda for the national capital. Edited excerpts: 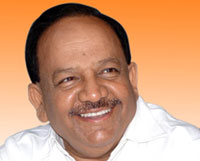 On public transport and air pollution

There should be coordination between departments in the municipal corporation and the state government to make transportation hassle free across the National Capital Region. Improving point-to-point connectivity through intermodal transport will help ensure this.

There should be connectivity between Metro stations, interior areas and schools. This would help reduce pollution, traffic congestion and accidents involving children to a great extent. There should be a policy wherein buses would ferry children from Metro stations to schools against a comprehensive ticket, priced at a rate much lower than that charged by the school bus.

Buses must be withdrawn from major routes to address the twin necessities of reducing pressure on roads and air pollution. Rather, buses should ply only between Metro stations and interior areas. This will lead to the viability of the mass rapid transport system and reduce the government subsidy required to run it. A holistic approach must be taken on public transport to reduce car use. One way could be to extend smart cards for all mass transport systems across the city to ease accessibility. The challenge before us in the second decade of the 21st century would be to persuade more and more people to use public transportation instead of private cars. This will also help the pedestrians and cyclists to use the roads, without the hassle of being elbowed out of the roads by fast-moving vehicles.

We also think that the Delhi Ring Railway should be revived. It would be a cheap and effective transport system for commuters. Earlier, there were 13 inter-city train services. Since 2011, only six lines are in operation. Poor road connectivity to these Ring Railway stations led to reduction in ridership. So, improving connectivity to the railway stations would be a priority.

Diagnosis is essential for treatment. It is important to understand the Bus Rapid Transit System (BRT), which failed during the ruling government. Since the Delhi government does not have a transport policy to deal with such issues, a committee of experts could be appointed to study the reasons of BRTS’s failure in the capital city.

Segregation of waste should be taken up at a mass scale. I am already involved in the anti-plastic movement. I think plastics take a heavy toll on the environment. The present issues surrounding waste-to-energy plants should be studied by involving independent experts. Several countries have adopted these technologies. Priority should be to get the best of the modern ideas of dealing with waste without harming the environment.

Almost 50 per cent of Delhi’s population does not have sewerage connection. This is a public health hazard. The public or government hospitals must be upgraded and made more efficient. Blood banks should never run out of stock. The personnel in the health services department must be made accountable. Almost 90 per cent of the funds allocated in the annual health budget is spent on treatment. This leaves almost nothing for prevention of diseases. The focus should, therefore, be in creating tertiary hospitals that can prevent diseases and contain epidemics. The government should also focus on preventing duplicity of efforts of NGOs working in the health sector to ensure proper and meticulous assignment of roles, responsibility and demarcation of geographical region.

Similarly, a universal health insurance scheme should be created. Indigenous medicines should also be used in the treatment. The idea is to turn the issue of health into a social movement, which includes promoting healthier and positive lifestyle.

On reviving the Yamuna river

At present, 40 per cent of the sewage flows into the Yamuna without any treatment. To save the river, the sewage disposal system should be strengthened by creating new sewage treatment plants. The Yamuna flood plain must be protected by planting trees. This will activate the underground streams and enrich the soil, while filtering the water through the soil.

Sufficient water is available in Delhi. But 40-50 per cent of the water supplied is wasted. For the past 15 years, tanker mafia and leakages in pipelines have aided in this wastage of water, and people buy water at a high price. This raises suspicion about the role of private water companies. Water wastage is a serious issue and it needs to be tackled as a priority for solving drinking water problems in the city. On the other hand, by adopting methods like water harvesting and recycling at individual and community levels, we can conserve and use water efficiently. This could be done only by spreading awareness.

On illegal slums and their development

Therefore, there is scope given for a humanitarian attitude towards the residents of these areas. There should be 50 per cent allocation of dwelling units for the poor in government housing projects. The in-situ rehabilitation of slums and jhuggi jhonpri clusters will be implemented using land as a resource. Built-up accommodation of about 25 sq metres in multi-storey structures would be allotted in place of plots of 18 sq metre and 12.5 sq metre. There would be compulsory construction of at least 35 per cent of dwelling units for the economically weaker section by all developers of group housing.

Privatisation of power poses a big challenge for the common people. At the time of privatisation, people were assured that the private power distribution companies (discoms) would reduce tariffs by bringing down transmission and distribution losses. The aggregate technical and commercial losses in the city have been reduced from 62 per cent to 25 per cent in BSES-served areas and from 50 per cent to 18 per cent in NDPL (North Delhi Power Ltd, Tata) areas. But the discoms have not bothered to reduce tariffs. It is estimated that a one per cent reduction in transmission and distribution losses generates annual savings of Rs 700- 800 crore. Discoms have to bring down the tariffs.

We will embark on a full-fledged campaign to promote alternative energy sources in Delhi. A project to set up industrial units in the joint sector between Delhi State Industrial Development Corporation and reputed private sector partners for mass manufacture of photo-voltaic cells, reflectors, and such equipment will be examined. Over the next five years ground will be prepared for generating solar power for meeting at least 10 per cent of Delhi’s power needs.