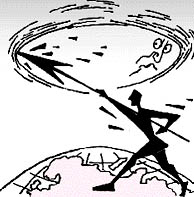 human assault on the earth's atmosphere continues. Recently, the World Meteorological Organization ( wmo ), a un agency based in Geneva, revealed that the ozone hole measured over the Antarctic during the South Hemisphere spring, is already twice the size of Europe. The hole, first observed in the Antarctic in the '80s, has steadily increased over the years.

The ozone layer is a fragile stratum that absorbs most of the sun's ultraviolet radiation in the upper atmosphere and has been observed to deplete for part of each year due to reactions with sunlight and human-made chemicals. "Ozone destruction is becoming worse, especially when the stratospheric temperatures are very low," according to Rumen Bojkov, wmo 's advisor on ozone. Bojkov adds that in the atmospheric layer form 17 km to 22 km, "the ozone is nearly completely annihilated". With increasing radiation levels on the earth's surface, scientists are worried that incidences of skin cancer, cataract infections, lower crop yield and a disturbed marine food chain may occur sooner than expected.

The ozone hole now measured covers more than 20 million square km or "twice the surface of Europe from the Atlantic to the Ural Mountains," says wmo quoting reports from monitoring stations situated in the Antarctic. This year the hole has started forming much earlier compared to previous years. Cold weather along with sun's rays and the presence of chemicals combine to create the ideal condition for maximum ozone depletion at this time of the year. According to Frederick Delsol, director of atmospheric research for wmo , "We may end up with a larger hole than last year, but it is not yet certain. It will depend partly on the atmosphere circulating in the stratosphere." Ozone levels have fallen down to 180 units (which amounts to a deficiency greater than 45 per cent) over the entire continent. An ozone hole is said to exist when levels fall below 200 units.

Steps have been taken to control the emission of ozone depleting substances -- chlorofluorocarbons ( cfc s) used in aerosols and refrigeration, halons, tetrachlorides and methyl bromide solvents. Industrialised nations have already banned the usage of cfc s while developing countries have until the year 2010 to develop cfc -free products. Hydrofluorocarbons will be phased out by the year 2030 in developed nations. Researchers are of the opinion that the build-up of these chemicals in the atmosphere has begun to slow down and that around the turn of the century, the ozone layer should begin to gradually restore itself.