Not enough to drink 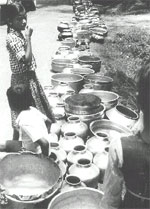 fresh water supply is gradually becoming a matter of serious concern, says a report of the United Nations ( un ). With nearly 900 million people affected by diarrhoea each year and an equal number suffering from diseases caused by round worms, unclearn water ranks at the top of the world's pollution problems.

At a meeting of the un Commission on Sustainable Development, the World Health Organisation observed that one billion people worldwide still lack adequate supplies of clean drinking water. Nearly two billion people do not get water for proper sanitation. The study by the un and Stockhold Environment Institute warns if major initiative is not taken, two-third of the world's population will live in countries facing severe water problems by the year 2005. Cielito Habito, secretary of Socio-Economic Planning for the Philippines says, "We must ensure adequate drinking water for everyone in the world." For this, the cost of providing water is fully borne by someone, he adds.