THE much-publicised ‘breakthrough’ for tuberculosis (TB), hailed by the World Health Organization (WHO) as capable of bringing the global epidemic under control, has been criticised by top TB researchers. Experts are anxious that the WHO’s statements will fuel a dangerous complacency that could increase the death toll of TB patients. 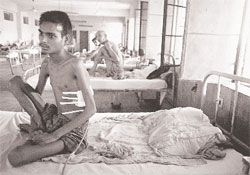 Recently, a week before the World TB Day on March 24, the WHO announced that TB can be treated with a combination of drugs administered for six months under close supervision, a treatment known as directly-observed therapy short-course. The WHO claimed that the therapy could reduce the death toll by 10 million over the next decade. But most TB experts have dismissed view as exaggerated.

“This is hyperbole,” says Paul Fine, an epidemiologist at the London School of Hygiene and Tropical Medicine. Douglas Young a leading researcher in TB molecular biology, who advises the WHO’s global TB programme, has resigned in protest. WHO officials argued that their statements did not imply that the epidemic has been brought under control.