A trade that plies on pushing cyclists 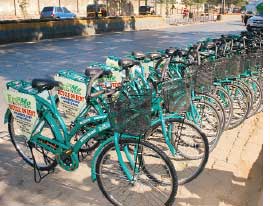 Thane  city residents who want to save money on petrol or want to ride their way to fitness now have the option of renting bicycles. Ecomove Solutions Pvt Ltd launched a rent-a-bicycle scheme on January 17. Under the scheme called FreMo (short for freedom to move), people can hire bicycles from any of the five bicycle stations of the company across the city.

After use, the cycles can be returned to one of the stations; the rental charge is Rs 5 per hour. But to avail of the scheme, a person has to buy a smart card that carries basic information about members like address and identity details, said V Ramesh, founder head of the company.


The membership fee is Rs 1,500 a year; it allows a person 300 hours of cycling. Members also have to deposit Rs 2,000 initially which is refundable along with one time administrative charge of Rs 499.

Ramesh is a financier-turned-entrepreneur. “At present we have just four members but I am sure people will understand the benefits of the scheme and it will catch on,” said Ramesh who has taken a loan to start the initiative. Besides promoting cycling, Ramesh said his aim is to collect real time data on cyclists. A large number of residents get to work on cycles; many who work in Mumbai, 35 km away, also use cycles to get to the railway station to catch their train, said Ramesh. Once the data is collected it will be presented to the city municipal corporation so that it fast-tracks its proposal to build cycle tracks, he added. The municipality had started demarcating the 82 km-long cycle tracks along city roads but the project has not taken off (see ‘Thane plans a cycle track’, Down To Earth, May 15, 2009). Ramesh said the scheme suits Thane city, as it has wide roads and avenues and is relatively safe for pedestrians and cyclists.