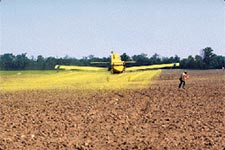 A revolution in farming is in the offing across Europe, courtesy the new Water Framework Directive . The order must become a national law across the 15-nation European Union (eu) bloc by the end of 2003. It sets tough new limits on the level of pollutants permitted in rivers and groundwater that will force land-use changes. "Farmers are going to have to retreat," says Simon Harrison of Ireland's University College Cork. "In the last decade of the 20th century, 95 per cent of British freshwater was polluted by nutrients -- most of which was from farming," points out Penny Johnes of the University of Reading, and adds: "British waters are highly degraded in terms of nutrient pollution. We need to change land use." Point source pollution from factories or spills is under control, but leaching from farmland has been downplayed because it is more complex and difficult to tackle, believe experts. They contend that the problem is also due to inappropriate or overly intensive land use that either leads to local flooding of towns and villages because rivers are diverted, or means heavy run-off of pollutants.

Throughout western Europe, current farming methods are not sustainable. "If you want to have nice rivers there are going to be some changes in agricultural practices," feels Harrison. Johnes laments the fact that farmers are being encouraged by subsidies to over-produce food, which is then being dumped in world markets. Experts advocate a new system to encourage farmers to be custodians of the land. A water quality benchmark that goes back to the less intensive farming practices could be a sensible option.