Guatemala is exploring the possibility of legal action against multinational cigarette firms, the first such move by a country 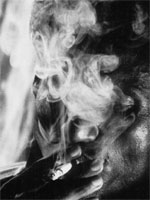 the new battle in the war against tobacco may soon be fought in Latin America. Guatemala may take legal action against two tobacco companies to recover healthcare costs associated with smoking. The attorney general of Guatemala, Acisclo Valladares Molina, has hired a us law firm to consider litigation to recover money spent by his government on providing healthcare for smokers. Valladares said that an estimate of us $500 million in healthcare costs was "not an exaggeration".

A success in this case may open a Pandora's box for several countries where tobacco-related diseases burden state healthcare systems. This could mean fresh trouble for the multinational tobacco giants that have wriggled out of proposed monetary settlements in the us recently.

The us legal firm says that they are still examining the current healthcare costs involved and the companies that might be targeted. The Guatemalan market is shared by two companies, Tabacalera Nacional, a subsidiary of British American Tobacco ( bat ) and Tabacalera Centroamericana, controlled by Philip Morris. The latter controls 70 per cent of the market and manufactures Rubios, the largest-selling brand in the market.

An associate attorney of the Houston-based us consulting legal firm has said that it is yet to be decided whether there would be a legal battle or an out-of-court settlement. "They can shut this down or they can dig their heels in and fight," she said. Valladares suggests that the legal action may take place in the us courts.

The tobacco industry's response has been measured. A spokesperson of Tabcalera Nacional says that he had no clear information about the legal action. Tabacalera Centroamericana has declined to comment. Valladares, however, says that his country would prefer "to go for the kill". He expresses the hope that other Latin American nations would join the war in their own courts.

Smokers suffer from various diseases that affect the lungs and the blood vessels. Many of them develop chronic ailments. According to World Health Organisation ( who), about three million people die every year due to smoking-related illness. The who says that the risk of death from tobacco in the age group of 35-60 is estimated to be around 13 per cent among males. In the us , the direct healthcare costs associated with tobacco smoking was estimated in the 1980s at us $12-13 billion dollars a year. In one's lifetime a smoker would incur an additional medical care cost of us $6,000, compared to a non-smoker, according to estimates published by who .

Tobacco has been a part of the indigenous American lifestyle before the Spanish conquistadors found it and passed it on to Europe to be marketed worldwide as a symbol of machismo. It has now provided the cause for the toughest trade wars and legal battles in the Americas.