A new bill leaves little scope for dissent on GMOs 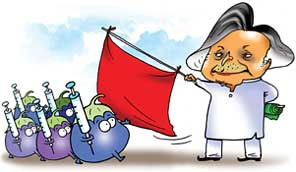 If the nationwide furore over Bt brinjal was driven by the fear of unsafe food being pushed down the throat, the proposed Biotechnology Regulatory Authority of India (brai) bill goes a step further to silence all opposition. The bill will bring about changes in regulating the research, transport, import, manufacture and use of genetically modified (GM) products in the country.

The bill, like its earlier version, the National Biotechnology Regulatory Authority, 2008, has been proposed by the department of biotechnology (dbt) in the ministry of science and technology. It is likely to be approved by the cabinet in March and then tabled during the Budget session of Parliament.

Activists see a conflict of interest in housing the authority under the department as it is also mandated to promote modern biotechnology.

“The dbt is an agency promoting genetically modified crop. If we want an independent revamped statutory body, the authority needs to move out of dbt. How can the dbt promote and regulate?” asked P M Bhargava, molecular biologist and a Supreme Court nominee in the Genetic Engineering Approval Committee (geac).

The brai proposes to look at impacts on human and animal health as well as the environment.

Once an application is received, it will be sent to brai’s risk management unit. This unit will do a “science based evaluation” and submit a risk assessment report. Following this it will go to a product rulings committee for its recommendation. “When there is so much debate and a strongly expressed need for disclosure and scrutiny of the approval processes, the brai bill and the processes it prescribes, present no scope for this,” argued P V Satheesh, national convenor of South Against Genetic Engineering (sage), a coalition of civil society groups in south India.

Civil society groups like sage are taking the cause forward through signature campaigns, others in the coalition are trying to garner support from politicians across the country to oppose the bill when it is tabled in Parliament.

“The brai bill, 2009 works on the premise that modern biotechnology is acceptable and its research applications will continue. The introduction of this bill presupposes the importance of such modern biotechnology and only seeks to regulate its introduction and application,” Satheesh said. He feels this is “antithetical to the position of civil society groups working on revival of agro-biodiverse farming controlled by farmers’ knowledge and practices.”

Both the pro- and anti-GM groups support a credible regulatory regime, a lacuna that was exposed during the Bt brinjal debate. But the bill in its current form, activists feel, is flawed and is tilted to favour GM products. According to a clause in the draft anyone “who without any evidence or scientific record misleads the public about the safety of the organisms and products…shall be punished with imprisonment for a term which shall not be less than six months but which may extend to one year”.

The draft does not explain what it would accept as evidence or scientific record, Kavitha Kuruganti, member of the Coalition of GM Free India, said. “This is completely objectionable and is meant to harass civil society groups concerned about the application of this hazardous technology,” she added. “The clause is diabolic; it is a gag order,” Bhargava believes.

The authority will take over the functioning of the geac and the Regulatory Committee on Genetic Modification (rcgm). The authority would comprise two members apart from the chairperson and provide for single window clearance for genetically modified crops. Even the US has a multi-agency system of clearance of GM crops through the food and drug administration, United States department of agriculture and environment protection agency, Bhaskar Goswami, member of the Forum for Food and Biotechnology, said. “ brai  would dilute our regulatory system,” he added.

The bill takes away from state governments the power to reject a biotechnology product; it overrides the constitutional right of states on agriculture and health by making the proposed authority solely responsible for releasing and controlling GM organisms in the country. The bill envisages only an advisory role for states in the form of state biotechnology regulatory advisory committee; the committee will have no decision-making powers.

“The bill ignores and could impinge or override progressive legislations like Biological Diversity Act,” added Kuruganti. There is a provision in the draft to retain confidential commercial information. “Our past experience shows that this cannot be left to the discretion of officials. All bio-safety related information has to be placed in the public domain before announcing a decision,” she added.

In October 2009 the geac cleared Bt brinjal that could have been India’s first genetically modified crop. Seven public consultations followed which were marked by protests; nearly 8000 people including scientists, farmers, activists and consumers attended the public meetings with environment minister Ramesh. On February 9 he announced a moratorium and said it would remain until a consensus was reached among the scientific community and the public regarding the GM product’s safety.

The minister stressed the tests recommended by scientists M S Swaminathan and Bhargava would be carried out and an independent lab would be set up to test GM crops during trials. So far geac has been analyzing data that was provided to them by the producer company.

“If the government sets up the lab and all the biosafety tests are done, it is going to take at least another 22 to 25 years to clear the Bt crop,” Bhargava said. At present though anti-GM groups are worried Bt brinjal seeds are already being sold in the market. Goswami says it is possible farmers sold some of their crops from the trial fields in the market. Biotech giant Mahyco conducted these trials. In its meeting on February 17 geac decided the Bt brinjal seeds developed by Mahyco would be kept with the National Board of Plant Genetic Resources . It was also decided during the meeting the GM food crop developer would be liable for any leakage of Bt brinjal seeds.

Bt in our blood?

The only way to know if Bt brinjal is already in the supply chain is through labelling and traceability for gmos in India. This is what happens in the European Union, said Gilles-Eric Seralini, French researcher in molecular biology and one of the first to warn against the dangers linked to gmos.

“Over 150 countries have appealed for identification of gmos in the International Cartagena Protocol on Biosafety (to which India is a signatory), because these are living organisms that could induce a new form of genetic pollution,” he said. A lab is important is India, Seralini added.

Confirming fears of not being left with a choice in the matter, the director general of the Council for Scientific and Industrial Research, S K Brahmachari, was quoted in the media saying, “If Bt gene had to enter humans, it probably already has. We have been eating soy and corn imported from the US which has introduced Bt genes in these crops.” Brahmachari denied he said this when Down To Earth contacted him.

Soybean oil is imported from Brazil and Argentina, which grow GM soy. The oil India imports is not labelled as its labelling regime notified under the Food Safety and Standards Authority is not yet operational.

Geneticist and head of Gene Campaign Suman Sahai believes oil, being fat, would not contain Bt traces. Bhargava contends the Bt gene becomes part of the dna and will be found in traces in the oil. “The level of detection is low and we do not have the sophisticated labs to find the traces,” added Bhaskar. But that cannot justify the clearance of Bt brinjal or any other genetically modified crop, he added.

When there is no traceability, said Seralini, there is absolutely no way to link for sure a chronic pathology to an environmental problem, or to a new food. These chronic pathologies are cancers, hormone or nervous diseases, reproduction or fertility problems, sperm deficiencies, immune diseases or allergies and birth defects.

With inputs from K Dinkar