Blessed are the meek...

...for they keep the rainforests' biodiversity high 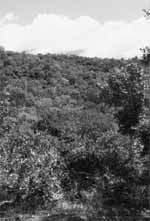 researchers based in the us and Panama claim that the tropical rainforests' rich diversity can be traced to a scarcity of seeds and to the process through which young plants fill in gaps as older, mature trees die. Their observations, based on a15-year study of over 300,000 trees may finally help answer a question that has vexed ecologists for decades.

Tropical rainforests' are some of the most diverse habitats on the planet, with hundreds of different tree species all within a few hectares. For over 20 years now, ecologists have suggested that this diversity was helped by the mosaic of gaps formed as trees die and fall. Different conditions created by temporary gaps in the forest were thought to allow new trees to flourish. If the species present in such gaps change as the forest canopy regenerates, they reasoned, then a forest with gaps of many different ages should hold a mix of many species, resulting in high diversity.

The rainforest on Panama's Barro Colorado Island has such a pattern of different-aged gaps, making it an ideal place to test the theory. Ecologist Stephen Hubbell of Princeton University in New Jersey, usa , and his team studied a 50-hectare patch of forest in which every tree with a trunk diameter greater than 1 centimetre was measured repeatedly from 1980 to 1995.

To their surprise, the researchers found no evidence that tree falls and other disturbances boosted diversity: the gaps created by fallen trees contained exactly the same mix of species as unbroken forest, and sites that were disturbed more frequently did not contain more species than the less disturbed areas. Instead, the evidence pointed toward seed and seedling shortages as the main cause of the forest's high diversity. In a painstaking not to mention time consuming 1.3 million seeds collected in 200 seed traps over a 10-year period, only a handful of the 314 adult tree species delivered seed to more than half the traps. Similarly, a census of seedlings on 2,000 plots, each one-metre square, turned up no seedlings at all for the majority of the adult trees. The findings were published in a recent issue of the scientific journal Science .

Basically, things are so dispersal-limited that the gaps are being occupied largely at random, says Hubbell. Many of the sites are occupied not by the best competitor for the site, but just by whoever happened to be there. This allows the weaker species in and promotes diversity. Botanists know that seeds and seedlings of different trees germinate and grow best under varying conditions, so over a century or more, the mosaic of gaps may still affect the species which eventually appear in Hubbell's censuses.