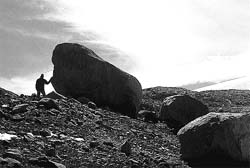 the waters around Antarctica may be teeming with a far greater diversity of larvae than biologists realised. Researchers diving under the ice have discovered 10 times as many different types of larvae as were previously known to be there. They could provide a barometer to check the effects of climate change, say the researchers.

Many bottom-dwelling marine animals, starfish, for instance, have larvae that drift along with the plankton. According to a rule proposed by Danish marine biologist Gunnar Thorson in 1950, the diversity of these drifting larvae should decline from the tropics to the poles as the water gets colder. Polar invertebrates are more likely to produce larvae that stay on the bottom, as food suppliers for drifting larvae disappear in dark polar winters. However, Damon Stanwell-Smith and his colleagues at the British Antarctic Survey in Cambridge, uk , have found an astonishing diversity of larval life drifting in the chilly waters of the Weddel and Scotia Seas, where Thorson's rule suggests there should be only a handful of species. Their two-year survey focusing on the South Orkney Islands netted 131 different types of planktonic larvae in an area where just 12 were known earlier. "Nobody has sampled all year round and no one has looked at larvae in detail," explains Lloyd Peck, supervisor of the study. "Biodiversity is as high as in temperate and may be even tropical latitudes."

Stanwell-Smith collected the larvae while diving around Signey Island, towing a plankton net by hand with the help of a fellow diver. The team took samples every two weeks, even during winters, when the sea was covered with ice. They then grouped the larvae into different types on the basis of their shapes.

The team plans to propose that ideas about the pattern of larval biodiversity on our planet need to be revised. "All the work taught in the university courses is based essentially on three or four surveys by Thorson in the 1930s and 1940s in the North Atlantic," says Peck.

"In an environment where animals are adapted to low, very constant temperatures, they will be vulnerable to minute temperature changes." Peck believes a slight but sudden rise in temperature could have a catastrophic effect on the larvae, as there is probably a narrow range of temperatures in which they can develop normally. "Ideas about polar marine systems are changing fast," says David Barnes, marine biologist at University College of Cork in Ireland.