Researchers say that obesity drugs are harmful for health 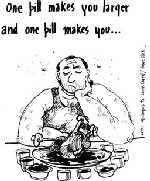 the use of appetite suppressant drugs adversely affects the health of people, according to reports published in the uk and usa . Dexfenfluramine, a commonly prescribed dieting drug, boosts the levels of serotonin in brain and influences the neurotransmitter that carry chemical signals across the tiny gaps between one neurone to another. Serotonin is a compound in the blood serum that acts as a neurotransmitter. Dexfenfluramine is an improved version of a drug called fenfluramine, and has lesser side effects than fenfluramine.

Studies in animals show that fenfluramine and dexfenfluramine damage serotonin producing neurones, at doses as low as twice the dose needed to reduce weight. As these changes can be noticed only after the brain is dissected, it is not yet clear whether similar damages occur in the human brain. Recently, the Food and Drug Administration ( fda ), usa, has demanded further studies to check brain damages in people who take obesity drugs.

The Royal College of Physicians ( rcp ), London, recommends that appetite suppressant drugs should be prescribed as a last resort and only to patients who are clinically obese and respond rapidly to the drugs. The new guidelines have essentially been made to crack down on the inappropriate use of these drugs. The International Narcotic Control Board has sounded a special warning on the increasing abuse of these drugs especially fenfluramine because of their psycho-active side effects ( British Medical Journal Vol. 314 No. 7095).
The rcp' s report compiled by an expert working group concludes that the treatment with anti-obesity drugs is appropriate only for people with a body mass index greater than 30. People who fail to reduce their weight by 10 per cent after three months of determined effort -- with a combination of diet, exercise and behavioural change -- should use the drug. The experts, however, advocate further caution. These sliming pills should be prescribed for more than three months only if the weight of a patient is reduced by at least 10 per cent during the period and does not increase by three kg at a later stage.

The Department of Health, uk , asked the rcp to take up this task after widespread concern over the misuse of drugs by the private clinics. The rcp report calls for a continued prescription of centrally acting appetite suppressants but notes that only one in nine patients is likely to benefit from a long term prescription of dexfenfluramine. This is the only anti-obesity drug currently licensed in Britain for use beyond 12 weeks.

The rationale for the recommendation is simple and sound. Reports on the long term safety of such drugs beyond 12 months are not very reliable. According to David Grehame Smith, a member of the working group and Rhodes, professor of clinical pharmacology at the John Radcliffe Hospital, Oxford, serious occurrence of primary pulmonary hypertension is noticed after three months of taking centrally acting appetite suppressants. They, therefore, urge doctors to ensure that the drug is used with proper medical protocol and a close monthly monitoring.

This has also been confirmed by a recent Effectiveness Bulletin on the management of obesity produced by the National Health Service Centre for reviews and dissemination in York, uk . According to Susan O'Meara, a research fellow at the Centre, there is a concern about the pattern of weight regain within six to nine months after the drug therapy. She says that maintenance strategies such as diet, behaviour and life style changes, are very successful which most physicians advocate initially for weight shedding.