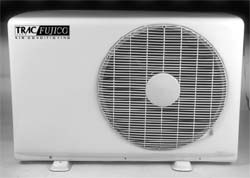 bangalore-based Trac Fujico Air Systems Ltd has become the country's first indigenous manufacturer to develop and introduce air conditioners (ac s ) that do not use hcfc (hydrochlorofluorocarbon). hcfc , used widely as a refrigerant, is a potential environmental hazard as it contributes to the depletion of the ozone layer.

Ozone depletion was one of the primary environmental concerns of the last decade when, alarmed by a rapidly-growing hole in the Earth's ozone layer, nations pledged to cut down their use of ozone-depleting chemicals. The ozone layer is critical for our survival, as it absorbs most of the harmful radiation from the Sun. In 1987, through the Montreal Protocol, most developed countries banned the production and use of chloflurocarbons ( cfc s) and halons, the main chemical agents behind the gaping hole in our ozone layer. Certain industries were affected initially, such as the aerosol and refrigeration sectors since these made extensive use of cfc s. Prior to the Montreal Protocol, household and industrial refrigerators, ac s and all other cooling devices used cfc s as their primary cooling agent. Though the ban made these machines obsolete in the West, many of them are still functional in the developing countries. One good sign came earlier this year, when scientists declared that cfc -usage had indeed gone down over the last 10 years. The threat to the ozone layer, however, is far from over. Seeking alternatives to cfc s, industries switched to other chemicals, one of which was hcfc . As the name suggests, it is not very different from their cfc s. Apart from posing a significant threat to the ozone layer, it also contributes to global warming. So thus began another movement, and this one tried to curb the new ozone threat -- hcfc s.

Recently, some us firms took up the challenge to produce cfc and hcfc -free fridges and used air as the cooling agent. Close on the heels of their achievement comes the news of this Indian innovation. It seems that a world free of any threats to the ozone layer is fast becoming a reality.

The new-age ac s developed by Trac Fujico, in technical collaboration with the Hong Kong-based Fujico, works on r -407- c , a hydroflorocarbon ( hfc) which is also an ozone-friendly chemical. The Trac Fujico ac s use scroll compressors -- a new generation compressor with very few moving parts -- unlike the conventional ac s that use reciprocating compressors. Apart from a different compressor, these ac s also use polyol-ester oil and outscore all currently-available ac s when it comes to energy efficiency, lower vibration and noise levels, and reliability. Anil Dev, president of Trac Fujico Air Systems Ltd, claims that their ac s, though 15-20 per cent more expensive than conventional systems, are so energy-efficient that a user can recover their cost scan within two years.

The company also upgrades existing air conditioning systems to new eco-friendly levels. They claim that these new ac s are compatible with all hfc -based systems. The company has already found takers for its new range, says Dev. "Six per cent of all orders booked are for our hcfc -free systems and we are targeting 10 per cent of sales in 1999-2000," he says. Current customers for hcfc -free systems include a multinational software company and a hotel. The company began commercial production of the ac s in June 1996. Since then Trac Fujico has claimed to have achieved impressive annual turnover figures.