India receives an annual rainfall of 400 million hectare metres, of which 75 per cent is received in four months. Floods generally follow, bringing devastation with them. As death tolls mount, damage reaches unimaginable scales. In the last four decades the country has lost about Rs 9,720 million in damages to crop, public utilities and houses. The price of human death for each individual remains incalculable. Nearly 40 million hectare of land is vulnerable to floods, with about eight million hectares flooded annually. Ecological degradation caused by humans adds to the problem resulting from erosion, poor natural drainage, among other things. 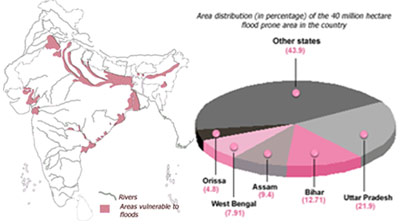 Mapping water woes
While the Ganga river and the Brahmaputra river regions make for the areas most prone to floods, states like Orissa suffers from the wrath of river Mahanadi, when the degraded mangrove system makes the region more susceptible to damage


Floods are not avoidable, but the damage they cause are. Only if the cause is understood and precautions taken
• Much of the problem of floods is due to drainage congestion.

• On occasions floods are caused by mismanagement of water reservoirs

• Despite 157 flood forecasting stations in India, the country still loses hundreds of lives and crores worth of property.