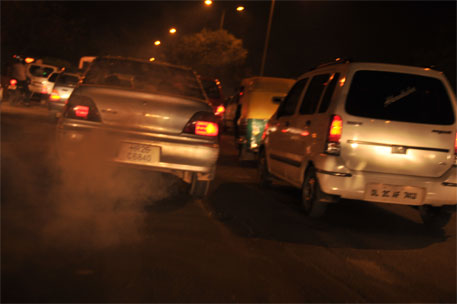 Prime Minister Narendra Modi on Monday released the national Air Quality Index (AQI) and health alert for public information. The Index that was launched in New Delhi will be used to inform people about daily air quality and to provide advisories on health consequences.

About 10 cities that have the capacity for real time air quality monitoring are expected to be linked to the system and a continuous 24-hour average data will be available daily from them. “The much-needed measure will help to protect public health and catalyse pollution emergency measures in cities,” says Delhi-based non-profit Centre for Science and Environment (CSE) which had been demanding adoption of this Index for a long time. According to a press release issued by the non-profit, the AQI will tell how clean or polluted the air is, and what associated health effects might be of concern. This can help people take precautions on “bad air” days.

“For the first time, the government has taken the initiative to inform people about daily air quality with simple descriptions that people can understand. It is cautioning them about possible health consequences. This can help build public awareness as well as public support for hard decisions needed to get cleaner air,” says Anumita Roychowdhury, executive director in charge of the clean air and sustainable cities programme in CSE.

The new AQI has been hosted on the website of the Central Pollution Control Board. The AQI has been developed for six pollutants – PM2.5, PM10, nitrogen oxides, sulphur dioxide, ozone, and carbon monoxide.

Air pollution levels have been classified in six bands with simple descriptions to help people understand. Each band has cut points of concentration with a colour code to visually express the level of severity that people can comprehend easily. Air quality is classified good if the pollution levels are at least 50 per cent below the regulatory standards.

The press release also says that the government is also making efforts to inform people about the health consequences of air pollution. For instance, “good air quality” days mean minimal health impacts. But on “moderately polluted” days, it may cause breathing discomfort in those suffering from lung or heart diseases. On “severely polluted days”, pollution may cause respiratory effects even in healthy people and serious health impacts in people with lung disease. “The ministry has also taken additional steps to report on two toxic pollutants – lead and ammonia -- that also have harmful effects over time,” adds the release.

CSE believes that the newly-released Air Quality Index is an important step forward to build awareness and protect public health. But it is time to push for aggressive and time-bound action in Delhi and other Indian cities to meet clean air standards and reduce the public health risk.

Expansion and improvement of air quality monitoring network across cities to generate real time air quality data is one priority. Besides this, ensuring good quality monitoring, disseminating daily air quality index and health advisory widely through print, electronic media as well as other communication channels will be needed to make the Index effective. Other measures demanded by CSE include implementation of pollution contingency measures to bring down peak pollution levels during severely polluted days. “Cities need pollution emergency measures to be implemented when air pollution level remains elevated for consecutive days to bring down the peak exposure levels,” says the think tank.

According to CSE, short and medium term action plans are needed in all cities to meet air quality standards and initiate a public awareness campaign and pollution emergency measures are needed to address this public health crisis.

With this step forward, India has joined the global league of countries like the US, China, Mexico, France and Hong Kong that have implemented smog alert systems. These countries not only issue smog alerts, but also implement pollution emergency measures to bring down the peak pollution levels. Indian cities need the same roadmap.