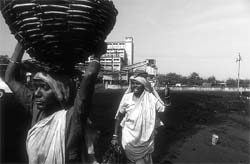 When women work hard physically, it is the toil itself, not the lack of energy, that stops menstruation, say us researchers. They have found that that the reproductive cycle can stop even if women keep up their energy levels with extra food.

It has been long known that heavy manual labour may cause progesterone levels to drop causing ovulation and periods to stop. Progesterone is the hormone secreted by corpus luteum , a small gland that develops in an ovary each month at the site from which an ovum or an egg has been released. The researchers, however, were unsure if this drop in progesterone levels was the body's response to hard work or resulted from the body's lack of energy.

To resolve this, researchers Grazyna Jasienska and Peter Ellison of Harvard University studied 20 women volunteers in a Polish agricultural community. These women work very hard in the fields during the summer months and even though they compensated for all the hard work by eating more during these months, their progesterone levels still dropped. This led the researchers to conclude that the work itself suppresses the reproductive cycle ( Proceedings of the Royal Society B , Vol 265, p 673).

The researchers give two possible explanations. The first: it is rather unlikely that extra food was freely available during our evolutionary past, so increased workloads would almost always produce a shortage of energy, "switching off" reproductive systems would spare women the extra burden of pregnancy and give them an evolutionary advantage. Alternatively, a high turnover of energy expenditure and intake may somehow constrain a woman's ability to allocate energy to reproduction.

Exercise is known to lower the risk of breast cancer, probably by lowering the sex hormone levels. The researchers suggest that this may also be why the incidence of the disease is markedly lower in the developing countries. "If we are right, we can predict that as lifestyles change in the developing world and physical workloads fall, the risk of breast cancer will rise," Ellison says.

Alan McNeilly, reproductive biologist at the University of Edinburgh, uk , thinks the study is thought provoking. The link between lifestyle and reproductive cancer is tenuous, he says. "But it is not unreasonable."