Child starvation could increase unless research is improved 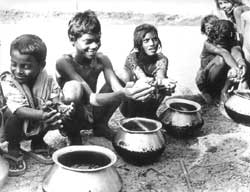 tens of millions of children could face starvation in 20 years time if the governments across the world do not focus on irrigation, education and agricultural research for poor countries, according to a new analysis. The analysis was performed by the world's most complex computer model of the global food system and showed that a 39 per cent increase in spending now could mean a corresponding level of decrease in the number of malnourished children in 2020.

The report, released on by the International Food Policy Research Institute in Washington dc , usa , a member of the Consultative Group on International Agricultural Research, funded by the World Bank and rich countries. Using a computer model named impact , Mark Rosegrant and colleagues predicted that 132 million children could face starvation in 2020 if current government policies are not altered. The model found that over the next 20 years, increases in population, coupled with slower rates of increase in the yields of key crops plus a vastly increased demand for meat in newly-prosperous, developing countries, will make food security ever more elusive. While with current policies the number of starving children will halve in China, the number will decrease by only a few percent in South Asia and will grow by 18 per cent in Sub-Saharan Africa. "The world's decision makers face a forking road," the team concluded. Either they can continue current policies, or boost spending on measures that increase food security.

To end hunger under current policies, Rosegrant and colleagues calculate, improvements in food security will cost us $570 billion between 1997 and 2020, with 21 per cent of it going for research. Boosting this total to us $802 billion would cut the number of starving children in 2020 from 132 million to 94 million. Most of those would be in Africa, but malnutrition could end completely in Latin America. This increase in spending is less than five per cent of developing countries' overall government spending now. However, the report notes that public funding for agricultural research and for production technologies such as irrigation has fallen over the past decades. If spending declines, then 178 million children are calculated to starve in 2020. impact models the entire world food system by calculating the effects of agricultural changes each year over successive years (www.newscienist.com , 28 August).