A low emission vehicle will soon be introduced in the market 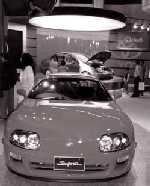 toyota Motor Corporation, Japan's biggest car manufacturing company, is expected to introduce low emission vehicle models in the market later this year. Company sources say that the fuel consumption and carbon dioxide emission levels of the hybrid cars will be half as compared to its other gasoline-powered models such as the Corolla. Other emissions, such as nitrogen oxide and carbon monoxide, would be cut by a tenth.

The hybrid car is one which uses duel systems (such as two fuels, one at a time) to run the engine. This car is started by its electric motor. The gasoline engine kicks in when the vehicle accelerates and runs at a high speed, and it shuts off when the vehicle decelerates or comes to a halt. In this process, the batteries of the electric motor are recharged.

In the present context, the hybrid car is much more practical than a purely electric vehicle ( ev). ev s are not always zero emission vehicles in any case because electricity comes from power plants using fossil fuel and they have several problems such as poor mileage and long recharging times, says Akihito Wada, executive vice-president in charge of research and development, Toyota.

These cars have been priced at around us $25,600. However, far from making profits, the venture is expected to make loss initially. But if the company starts mass production of these cars, it will not be a loss-making product for a long time, he says.
Soon after launching the hybrid cars in Japan, Toyota plans to market the cars in the us and Europe. Wada says the company needs at least 18 months to prove the reliability of the system in Japan, a country with a climate tough for vehicles. The company is expected to introduce a variety of hybrid models in future.