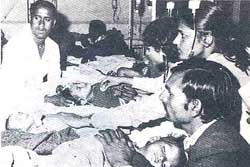 THE CLAIMS courts set up in Bhopal's gas leak-affected areas are rejecting more than half the compensation claims for death due to lack of evidence. Of the 40 courts that were to be set up, only 17 are functioning and have settled to date 396 cases involving disbursement of Rs 4.28 crore. In total, Rs 1,482 crore has been earmarked for compensation against 650,000 -claims.

On the other hand, in Delhi, a special judge appointed by'the Supreme Court in just one year disposed of more than 4,700 claims filed against Shrirain Food and Fertilisers Industries, following the oteum gas leak,in 1985.

Ironically, the government is still struggling to work out a mechanism for setting up the environment relief fund (ERF) to deal with future industrial catastrophes, despite the Public Liability Insurance Act (PLIA) coming into force in April 1992.

Meanwhile, Vadodara, considered one of the most hazardous zones because of its concentration of chemical industries, will get the country's first emergency relief centre. Three more such centres are slated to be started this year in Thane-Belapur near Bombay, Manali near Madras and Bhopal.