Essential repairs were successfully conducted on the beleaguered space station 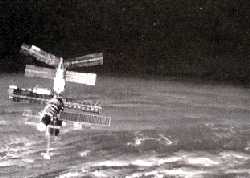 finally, there was some good news from the Russian space station Mir. The crew successfully carried out some repairs on August 23, restoring the electrical cables that had been cut off after a supply ship crashed into the station on June 25. This had caused a loss of connection with the module's solar panels that generate electricity for the space station. Consequently, Mir had drifted through space on less than half its usual supply of electricity.

This had prevented the carrying out of scientific research that the United States space programme has been conducting on Mir, which justifies their desire to keep sending astronauts to train at the station. The us has committed nearly us $500 million to pay for the training. The future of the Russian space programme heavily depended on the results of the repairs.

But the operation, the most intricate and risky of repair operations in Mir's history, was not without some hiccups. A delay of an hour was caused due to a leak in one of the space station's compartments. Then the left glove of Pavel Vinogradov, one of the cosmonauts, came loose. This triggered a loss of pressure that nearly caused the mission's cancellation.

But the glove was replaced and Vinogradov started working in the dark and sealed up Spektr module, reconnecting 11 cables that had been damaged in the accident in June. The repair work required Vinogradov to work in an area far smaller than a phone booth while wearing the bulkiest possible space suit.

Mir has been struck by a series of problems this year. Fires broke out in the space station and power failures became common. The collision in June did little to lift the spirits of the crew. Russian officials had even started to wonder out loud as to why the Mir, which had long out-lived its orbit life of five years, was still in space. However, it will be some time before the electricity on the station can be restored following the repairs. The crew will be entitled to take some well deserved time-off.