Geneticists examine how limbs were formed 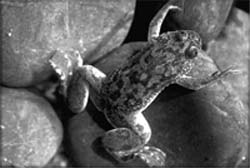 common sense tells us that limbs of all animals have three clear axes: shoulder-to-tip (proximal-distal), thumb-to-little finger (anterior-posterior), and wrist-to-palm (dorsal-ventral). The arrangement of bones confirms this and reveals a similar pattern in birds as well, whose limbs appear to differ drastically from humans for instance.

Among the more impressive pieces of synthesis in modern developmental biology is the realisation that limb development depends on similar genes. This, in turn, implies that deep down, the mechanisms of limb development must to be the same in all vertebrates. If true, it means the basic principles of limb development have remained the same right from the beginning of the evolution in vertebrates. A recent report by B Christen and J M W Slack of the University of Bath, uk , contradicts all this and points out that amphibians use a different sort of genetic logic to form limbs ( Nature , Vol 395, No 2134). More specifically, the genetic circuitry responsible for limb development along the dorsal-ventral axis differs between amphibians and mammals.

The current belief regarding limb development is that it depends on a combination of growth and patterning, with the latter depending crucially on special groups of cells, known as signalling centres. These signalling centres release diffusible small molecules that 'tell' various genes located in other cells what to do. In the mouse, it is known that a special group of cells located in the extreme ventral region (ventral epidermis) make a gene transcription factor called e n-1, and wherever e n-1 is present, represses two signalling molecules called w nt-7 a and r fng. As a result, the two signalling molecules are made only in the dorsal region where e n-1 is absent. w nt-7 a and r fng, in turn, positively regulate the functioning of other molecules that lead to the formation of dorsal structures.

Christen and Slack examined the expression of the gene e n-1, w nt-7 a and r fng in the developing limb of the South African clawed toad Xenopus. To their surprise, only e n-1 was expressed where it was expected to be, in the ventral epidermis. The activity of the other genes, far from being localised, showed a more or less uniform expression pattern throughout the limb bud.

Other experiments showed that there appeared to be no such anomaly when genes that regulated the proximal-distal and anterior-posterior patterns were monitored. It appears, then, that these two aspects of limb determination have been conserved ever since amphibians (the earliest four-limbed creatures) first made an appearance on earth. But at some later stage, mammals would seem to have modified the logic used by their amphibian ancestors in deciding on how to pattern the limb along the dorsal-ventral axis.