Russia's population is declining at an alarming rate 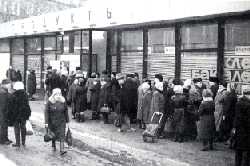 as populations in developing countries continue to grow straining inadequate resources, another part of the world is facing a different problem. Russia's population is falling relentlessly, giving rise to fears of a demographic disaster in the making.

A study conducted recently by the Population Research Service ( prs ), a us demographic research firm, predicted that Russia's population will drop by 25 million over the next 30 years if the present birth and death rates continue.

"Russia is losing its main state asset -- its citizens," the Russian Congress of Physicians had noted in a resolution passed after its yearly conference in mid-June. The conference attracted 1,700 of the country's leading doctors. It decried the "unprecedented peacetime decline in the Russian population" and observed that certain economists were right in pointing out that hardships caused by the transition to a free market economy is the main reason for the decline.

Hardships due to sudden economic reforms have boosted the death rate, it was observed. In a country which has a serious intemperance problem, the number of alcohol related deaths reported each year has been rising alarmingly. In 1995, 43,000 Russians died of alcohol poisoning, as compared to 350 in the us . In the years of the Soviet regime, the average stood at 16,000.

Malnutrition, inadequate inoculation, and a shortage of medicines have also taken a toll on public health, breaking down the resistance to deadly diseases that had all but disappeared during the Soviet days. A report by the World Health Organization ( who ) said that 90 per cent of all diphtheria cases between 1990 and 1996 came from the former Soviet Union, of which more than 100,000 cases were reported in Russia. Other diseases making a comeback with a vengeance include polio, meningitis, and tuberculosis. Also, Russia has recently woken up to the threat of aids . The country's aids prevention campaign was launched just two weeks ago.

According to Vladimir Pokrovsky, head of the aids Prevention and Cure Centre, Moscow, one million drug users will be hiv positive in Russia by 2000. "Everyday 10 to 12 new cases are registered in Russia, which implies a total of 100 to 120 new infections," he says.

Health care services are inadequate as public hospitals are often poorly stocked and very few can afford private medical services. Russia's death rate and low life expectancy is similar to that of a developing country. Average life expectancy for men is 58 years, the same as in India and Egypt. A recent who report said expectancy has further fallen to 57.4 years in 1997. In 1994, it stood at 64 years.

But unlike most developing nations, Russia has a highly literate population that is reluctant to bear children because of low incomes and an uncertain future. The country has the highest abortion rate in the world. Two foetuses are aborted for every birth on an average -- a fallout of puritanical Soviet times when birth control was frowned upon by the communist regime. At the same time, abortions could be conducted for a small amount of money, with the average Russian woman having about 8 abortions in her lifetime. Last year, 2.5 million abortions were reported in Russia, the highest in the world.

"Russia will face worse economic problems in the future than previously thought, as the retired population grows and adds to the strains on the economy," the prs report concluded.