‘The great Himalayan earthquake’, yet to arrive

It has been hypothesised for long that a large earthquake, called the “great Himalayan earthquake”, can strike anytime, but its time and place can't be predicted

Nepal is located in one of the most geologically vulnerable areas. It lies where the Indian tectonic plate moves under the Eurasian plate. Due to this shift in tectonic plates, stress is built up and earthquakes occur often to release this stress. Nepal has a long history of earthquakes and during the ones in 1255, 1344, 1833, 1866 and 1934, large parts of the country were destroyed.

Decades of research has gone into understanding these earthquakes. It has been hypothesised for long that a large earthquake, called the “great Himalayan earthquake”, can strike anytime, but its time and place cannot be predicted. In many locations in the Himalayan belt there is enough energy stored currently to lead to one. 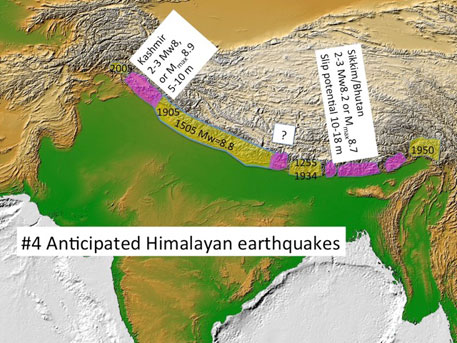 “This (Nepal earthquake) has unfortunately not come as a surprise. We expected an earthquake of high magnitude in the region between Kathmandu and Pokhara,” says Paul Tapponnier from Nanyang Technological University's Earth Observatory of Singapore who also studies earthquakes in the area. Tapponnier’s earlier work showed that the quakes in 1255 and 1934 were ground-breaking quakes or when ruptures develop in the earth’s crust and the pent up energy in the earth is released. As the areas west or east of the 1934 Nepal ground rupture do not have records of earthquakes, they are at a greater risk of a major earthquake.

Despite the fact that this is not the "great Himalayan earthquake", devastation has been enormous. One of the reasons for the devastation is the poor quality architecture and materials used in Nepal. Though there are rules about building in earthquake-prone area, nobody follows them, says Tapponnier. As it is impossible to predict when and where the great Himalayan earthquake is going to hit, it is important to strengthen schools, hospitals and fire stations and to develop emergency response plans.  “Such measures have been under way in Kathmandu for the past two decades and we shall soon learn how effective such measures have been,” says Bilham.