This man will never learn 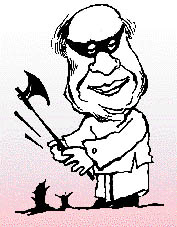 he has finally come out in his true colours. Prime Minister ( pm ) H D Deve Gowda's recent tirade against greens is disgusting, but this should have been expected. He has only re-affirmed what he had once advised a campaigner of the Centre for Science and Environment: environmentalists are against development and they often mislead people. At that time, he was the chief minister of a state. Today he is the pm of the largest democracy in the world. He has taken over the mantle of leading this country into a prosperous 21st century via the liberalisation avenue. Development is his mantra . And he has now held environmentalists to be public enemy number one... people who fear development, who oppose power projects and no doubt want to keep the vast majority in darkness; oppose dams and parch the teeming millions to death; oppose industry and let the growing workforce remain unemployed.

Let us, greens, not talk of ourselves. Let us talk of the people whose development this government is claiming to be pushing for. All major power projects are facing public agitations against them. All major dams are facing stiff popular resistance. And those that are functional are entangling the Union and state governments in self-defeating wars of attrition: Cauvery... Alamatti... Narmada... there has never been so much fire over water.

And that's not all. The recent demonstration of public anger over the government going ahead with the World Bank-Global Environment Facility's dubious and dangerous ecodevelopment project in seven of India's national parks and protected areas, which will oust uncounted numbers of forest people (who, despite the worst bureaucratic assaults on forests, have been managing to hold on to their traditional homes) is a clear writing on the wall: today, people are not buying the government's plans of bulldozing in an unsustainable development programme. Will the pm still say that the people have been fooled by the greens? Aren't these the very people to whom he will go a begging for getting elected to the Lok Sabha late this year? No, Deve Gowda does not have the people on his side, nor can he claim to speak on their behalf.

But is the industry with him? Will he be able to push developmental projects in a situation when liquidity is still tight, interest rate is high, exports down to below 10 per cent and the rupee just about holding out? In fact, as experts have been saying, this is "the worst economic scenario since 1991, when the economic reforms began".

In the meeting with the Associated Chambers of Commerce and Industry ( assocham ) in the capital last fortnight, the captains of industry blew up the government. They blamed the entrenched bureaucracy for keeping the public sector tightly under its thumb. The current political instability (Uttar Pradesh being a classic example); the inability of successive governments to work out stable policy changes; the government's clear inability to address pressing policy matters that are hampering investment -- all grievances poured out from those people whom the pm was banking on for providing him with the economic lift he badly needs. The more poignant, and politically important statements included lambasting the government's inability in restructuring the limping public sector; a bureaucratic system which vests decision-making powers on people whose "careers are on their last legs"; and politicians who "do not have the guts" to face a trenchant labour constituency. Lastly, it was not so much the greens as "intra-governmental hassles" which were accused of holding up projects.

The pm is making the government agencies bend over backwards to encourage foreign direct investment ( fdi ). But the government is not heeding the messages coming through clear from across the seven seas, from where the magicians will come with funds and re-charge India's flagging economic vitality. Indian business delegations have been making brave forays in terms of business offers to foreign investors. But these investors do not want offers. They want safer intellectual property rights, as the us secretary for commerce and international trade recently emphasised. They want the patent laws to be reviewed and changed to World Trade Organization and issues the Trade Related very Intellectual Property Rights levels. And these the Deve Gowda government has shown no keen interest in addressing. So, merely clearing 700-odd fdi proposals in less than four months -- one can easily guess what this rush will cost in terms of environmental damage -- will not bring the dollars zipping in. Investment of any kind needs the right climate, not rosy promises.

This is what is holding up your government's nakedly anti-environment, anti-people developmental projects and plans, Mr Deve Gowda. Don't blame the greens. You know nothing about their patriotic concerns. Know your economics first, your politics then, and finally, if possible, try to know what the people really want. The greens, in fact, will be the only ones who will be able to tell you that. But you are stubbornly closing the doors of that school behind you. The loss, of course, is yours.