100 per cent FDI in housing

Will Maharashtra boom or boomerang? 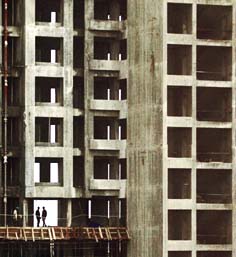 Maharashtra's push comes from a March 2005 press note issued by the Union ministry of commerce and industry, allowing 100 per cent fdi in "township, housing, built-up infrastructure and construction-development projects". This, claims government, is to generate economic activity, create employment and add to the existing housing stock. Investors have to fulfil certain conditions:

• Minimum land area to be developed in case of serviced housing plots is 10 hectares; for construction-development projects, a minimum built-up area of 50,000 square metres;

• Investment must be a minimum capitalisation of us $10 million for wholly owned subsidiaries and us $5 million for joint ventures with Indian partners. Funds must be in within six months of commencement;

• At least 50 per cent of the project must be developed within five years from the date of clearances;

• Providing basic infrastructure is the developer's responsibility. The investor cannot sell undeveloped plots where roads, water supply, street lighting, drainage, sewerage, and other conveniences have not been made available.

Maharashtra has introduced an additional mandatory condition of 25 per cent land allocation for poor, if the township is larger than 40.5 ha. "This clause is important; finally the government has realised it has to plan for the poor sections of society, who provide various services to the city," says Shah.

Planners say that in face of all-round keenness for greater private-sector participation in housing there is no harm in allowing fdi in segments where the domestic private sector has demonstrated potential; global competition here can be stimulating. But it is unrealistic to expect fdi to deliver, in otherwise identical conditions, what the domestic private sector is unwilling or unable to deliver; namely, economically weaker section (ews) housing.

As per its 1962 master plan, Delhi had to provide 400,000 plots of 25 sq m each to slum-dwellers by 2001. These were to be spread across the city in a planned manner. But now Delhi is keen to adopt Mumbai's slum rehabilitation scheme, which planners' claim will only worsen the problem (see Down To Earth, Dharavi simmering, Nov 30, 2004).

The Haryana Urban Development Authority (huda) also tried implementing an ews scheme in Gurgoan. In its much-touted public-private partnership contract, huda introduced a clause: out of the total area being developed by a developer, 55 per cent could be sold in the market, but 45 per cent had to be reserved for ews. Of the latter, 20 per cent had to be low income group (lig) housing. The other 25 per cent could be sold by a builder on no-profit-no-loss (npnl) basis. This scheme failed; developers sold plots on npnl basis to sister concerns, who in turn sold them at a profit to consumer.

Benjamin claims that apart from 25 per cent allocation, there are graver issues plaguing foreign investment in housing sector (see Interview: Government has to source water for us). The Indian government seems to have washed its hands off any liabilities by putting the onus of providing basic infrastructure on the foreign developers' shoulders. This might boomerang, like it did in case of Gurgaon where private developers sunk deep borewells and suck all the groundwater dry to provide water to their customers. "Allocating 25 per cent area for ews flats is not a problem, but as far as the costs is concerned, cross-subsidy will have to be followed. This means that the developer will charge a higher price to the consumers living in the 75 per cent area, which in turn will subsidise ews plots in the rest of 25 per cent area", he adds.


Planners, however, do not consider cross-subsidy within private-sector projects a good option. Says Gita Dewan Verma, New Delhi-based planner, "Rather than require each profitable project to forcibly include ews housing, it makes sense to let the private sector efficiently contribute other stock and recover a portion of profits to contribute to the subsidy pool. This way, whoever is developing ews housing is not burdened. The success of private-sector participation in housing depends on reserving integrated sites for ews housing, into which these recoveries can be invested. Without this, artificial land availability will lead to a glut of unsustainable up-market supply, make industry non-viable and the slum problem intractable. Also, in the short term, private players will be burdened with litigation wherever statutory reservations for ews housing exist and are not accounted for in new policies on private sector participation."

Delhi is already witnessing such litigation. Says Rajinder Singh, resident of a 50-year old slum in Delhi and convenor (housing) of Master Plan Implementation Support Group, a platform of citizens groups, "In 2000 summary demolition was attempted in our settlement to make way for a mega-housing scheme by builders, which started in 2002 without land use change. It was stopped and inquired into by the Delhi High Court (hc). In response to public notice for land use change issued as a result, over 1,700 local families filed objections on grounds of backlog on ews housing in the area. The builders incurred loss of several crore." Shiv Narayan, resident of Mahipalpur on the southern fringe of Delhi has filed another public interest litigation (pil) against construction of unplanned projects by private developers on land acquired from the village. In the context of his pil, pending in the hc, residents of Mahipalpur and other urban villages in the area have filed public notice responses about the need to embed private-participation in the overall planning framework.

Incidentally, cracks have already started to appear in fdi-linked large townships near Delhi. Last year the Delhi government cleared a proposal for such townships, with 35 per cent land for ews, and invited comments from experts and public for further discussion. But recently, lieutenant-governor B L Joshi realised public comments were completely ignored, leading him to haul up the Delhi Development Authority. The question is: will Maharashtra's housing policy plug such loopholes?