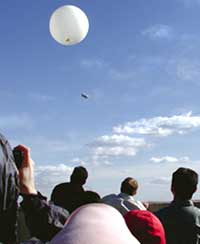 Scientists from 10 countries are conducting an experiment to demystify the life cycle of tropical clouds. Under the experiment, 1,000 weather balloons have been released over the past two months in Australia's northern city of Darwin to study cirrus, the wispy white clouds found at high altitudes.

"Cirrus are ubiquitous in the tropics and have a large impact on the environment, but the properties of these clouds are poorly understood," the organisers said in a statement. These clouds carry heat and moisture from the Earth's surface high up in the atmosphere -- a key process in driving heat around the globe. The weather balloons will collect this information, the scientists say.

Existing computer models do not accurately account for the heat and moisture exchanges occurring at high altitudes because they typically treat convection and cloud formation as separate processes. The last report from the Intergovernmental Panel on Climate Change estimates an increase of between 1.4 C and 5.8 C over this century. Scientists expect to minimise this huge uncertainty in the prediction through the weather balloons. The experiment involves scientists from Australia, Europe, Japan and the US.