New technique can also detect the disease in early stages 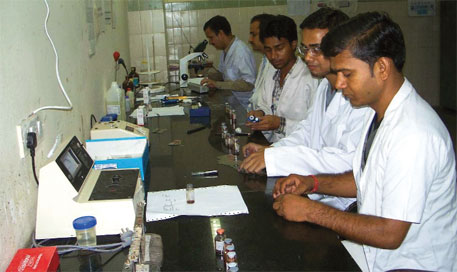 TYPHOID is a common water-and food-borne disease. It is characterised by sudden onset of fever, severe headache, nausea and loss of appetite. Other symptoms include constipation or diarrhoea and enlargement of the spleen. According to a 2009 report by WHO, Asia with 274 cases per 100,000 persons has the highest incidence of typhoid worldwide, especially in southeast Asian countries and Indian subcontinent.

But the methods used for detection of the pathogen are inaccurate. Patients have to undergo laboratory tests like blood cultures and ELISA several times because the tests are unable to distinguish between Salmonella typhii, the causative pathogen and similar microorganisms at one go. This delays treatment. According to data, untreated cases of typhoid fever result in mortality rates between 12 per cent and 30 per cent across the world. In contrast, treated cases have a survival chance of 99 per cent. The existing tests are cumbersome and costly too.

Now, researchers at the Defence Research Development Establishment in Gwalior, have devised a method that can take care of these problems. The technique can detect even minute traces of the bacterium in a patient’s blood within 10 minutes. The technique relies on identifying the antigen flagellin present in the pathogen.

For this, the researchers designed extremely sensitive immunosensors. These are basically gold chips coated with flagellin. When the antibodies in the blood samples from an infected person react with the antigen on the chip, a reaction occurs. This reaction is detected using electrochemical impedance spectroscopy. It involves studying the changes in the path of the light as it passes through the chip. The method can detect levels of the pathogen as low as one unit of antibodies in 102,400 units of blood serum.

Jyotsna Agarwal, professor at the department of microbiology at Chhatrapati Shahuji Maharaj Medical University in Lucknow, says the finding is important because there is an urgent need for better diagnostic tests which are more sensitive and specific to bring down typhoid mortality rates.

“Antibodies against Salmonella typhii antigen usually take between five and seven days to appear in blood,” she adds. If correct, the detection of this new technique is remarkable, she says. The study was published in the April 6 issue of Biosensor and Bioelectronics.