In 2013, the Earth witnessed its warmest November on record, says a report released by USA’s National Oceanic and Atmospheric Administration (NOAA).

According to the report, titled November 2013 Global Climate Report and issued by NOAA’s National Climatic Data Center (NCDC), much of southern Russia, northwest Kazakhstan, southern India, southern Madagascar, parts of the central and southern Indian Ocean and sections of the Pacific Ocean were record warm this November. Meanwhile, northern Australia, parts of North America, southwest Greenland, and parts of the Southern Ocean near South America were cooler than average. No regions of the globe were record cold.

Since record keeping began in 1891, the combined average temperature over global land and ocean surfaces for November 2013 was record high at 0.78°C above the 20th century average of 12.9°C. The month also marked the 37th consecutive November and 345th consecutive month (more than 28 years) with a global temperature above the 20th century average. 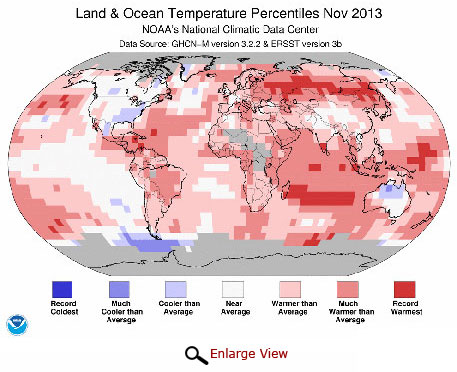 The rise in November’s temperature surpasses the previous record set in the 2004 by 0.03°C and is also the sixth highest monthly departure from average among all months on record. Moreover, it also surpasses the temperature recorded in March 2010, one of the last months in which El Niño conditions were present in the eastern and central equatorial Pacific Ocean. 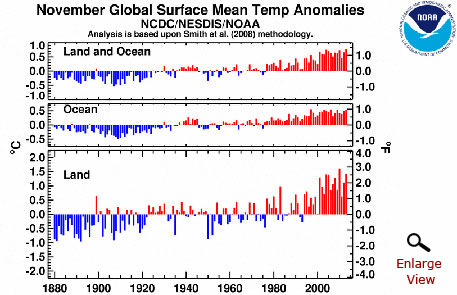 A few parts of the northeast and southwest Pacific, small sections of the eastern Atlantic Ocean, and various sections of the Indian Ocean, including much of the south central portion, were record warm in November. Many other regions across the other oceans were also much warmer than average.

Even with ENSO-neutral conditions (neither El Niño nor La Niña and the ocean temperatures near the long-term average) holding for the 19th straight month, the November global ocean temperature tied with 2009 as the third highest for November, at 0.54°C above the 20th century average. NOAA's Climate Prediction Center has forecast that similar conditions will continue in the central and eastern equatorial Pacific Ocean into the Northern Hemisphere till summer of 2014.

How hot will it get?