2014 was the warmest year since record keeping began, with average temperatures across the world registering an average increase of 0.69°C above the 20th century average, according to US’ National Oceanic and Atmospheric Administration (NOAA) and NASA. The December temperature was also the highest on record, a NOAA press release  said.

The long-term global average temperature is calculated from data collected between 1951 and 1980.

Earlier, UN’s specialized agency, World Meteorological Organization (WMO), had released a provisional report, saying 2014 was on track to becoming the hottest, or one of the hottest years on record.

The 10 warmest years on record, with the exception of 1998, have now occurred since 2000. This trend continues a long-term warming of the planet, according to an analysis of surface temperature measurements by scientists at NASA’s Goddard Institute of Space Studies (GISS) in New York. 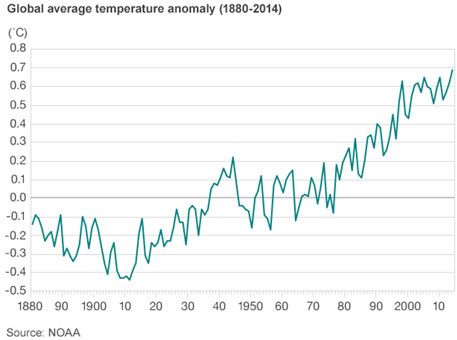 Scientists attributed the temperature rise to carbon dioxide and other green house gas emissions released because of by human activity. Majority of the warming has occurred in the past three decades, a US government news release said.

“This is the latest in a series of warm years, in a series of warm decades. While the ranking of individual years can be affected by chaotic weather patterns, the long-term trends are attributable to drivers of climate change that right now are dominated by human emissions of greenhouse gases,” said GISS Director Gavin Schmidt.

While 2014 temperatures continue the planet’s long-term warming trend, scientists still expect to see year-to-year fluctuations in average global temperature caused by phenomena such as El Niño or La Niña. These phenomena warm or cool the tropical Pacific and are thought to have played a role in the flattening of the long-term warming trend over the past 15 years. However, 2014’s record warmth occurred during an El Niño-neutral year, GISS said.

During December 2014, the global average temperature for land and ocean surfaces was 0.77°C above the 20th century average. This was the third highest for December in the 1880-2014 record.