The sea would gobble up more than 5,700 sq km of India's coastal land if emission of greenhouse gases grows unchecked 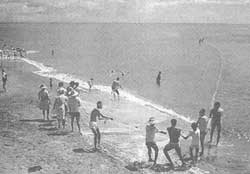 ASSUMING the worst-case scenario of a 1-metre rise in the level of the sea, caused by the greenhouse effect, more than 5,700 sq km of India's coastal areas could be submerged by the year 2100. According to a recent study, the value of this land, calculated at current prices, is a staggering Rs 1,52,740 crore -- more than 35 per cent of the country's gross national product for 1988.

The study, conducted by scientists from institutes such as the Jawaharlal Nehru University in Delhi and the National Institute of Oceanography in Goa, will be soon presented to the ministry of environment and forests (MEF). It covered the country's 53 coastal districts and Union territories, including the Lakshadweep and the Andaman and Nicobar islands.

The study predicts that the greatest loss of land -- as a percentage of a state's area -- would be in Goa, which would have 4.34 per cent of its area inundated, followed by West Bengal and Gujarat losing 1.38 per cent and 0.92 per cent of their land, respectively (see table). Unique ecosystems like the mangroves of the Sunderbans in West Bengal, Chilika lake in Orissa and several wetlands on the coast could be wiped out.

Virendra Asthana of JNU's school of environmental sciences, one of the principal investigators of the study, points out that India's coastal area land-use and administration are grossly mismanaged and it is about time the government set things in order.

Presently, about 416 million people live in the coastal districts. The areas susceptible to submergence are home to about 7.1 million people. In the more densely populated states of West Bengal and Maharashtra, the number of people living on land that is likely to be submerged is 1.61 million and 1.37 million people, respectively. The study projects that the Lakshadweep islands could also be flooded out.

The study, commissioned by the MEF in 1989, is based on a framework outlined by the Intergovernmental Panel on Climate Change (IPCC), an international group set up to gauge the potential impact of climate change on areas such as agriculture and industry.

Though the economic loss the country is likely to suffer is enormous, Asthana says, "The costs are in all probability an underestimate. The real value could be 25 per cent more." He cautions that the results of the study are based on data and economic estimates that are sketchy, at best. He says that better estimates can be made only by micro-level studies.