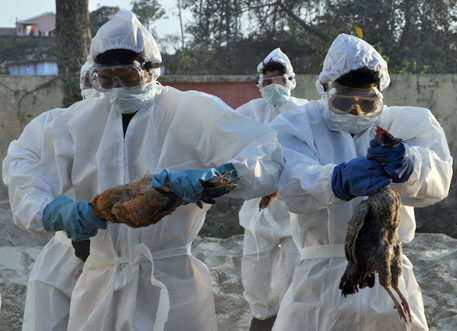 About 2,500 birds have been culled in Bihar’s Purnia district to control the spread of bird flu. Last week, the district administration confirmed that blood samples of chickens in a government poultry farm in Maranga area had tested positive for bird flu.

The administration had constituted 15 teams for culling chickens and destroying eggs. District magistrate Manish Kumar Verma said the process of culling was delayed by 10 hours. Verma has ordered holding back the salary of 10 junior ranking administrative staff members who went missing from duty.

"Culling exercise has been nearly completed. We are now focusing on chickens in domestic houses. As a preventive measure, culling teams have been directed to keep a close watch on chickens in affected areas," Verma said.

According to reports, death of ducks and chickens was reported from Balu Tola, Dargah Sharif and Jauka on Monday. A separate team, rushed to new affected areas from where deaths of birds are being reported, has collected blood samples of dead birds and sent them for examination. Administration had ordered culling of birds in one kilometre radius of government poultry farm.

Verma said that if the death of birds in the new areas is reported because of bird flu then culling radius will be increased from one kilometre to 10 kilometre. There was no report of bird deaths Monday evening.

The entire border of Purnia district has been sealed and inspection team has been deputed to stop cross border transportation of chickens and eggs. The border with West Bengal has been also sealed.

Purnia is one of the state’s largest suppliers of chickens and eggs. Kishanganj and Katihar, neighboring districts of Purnia, have been put on high alert. Civil surgeon of Katihar, Yogendra Prasad, has ordered immediate ban on sale, purchase and serving of chicken and eggs in the entire districts till further order.

In Purnia, district and block hospitals have been directed to keep enough stock of medicine for patients affected by bird flu. Hospitals have been also entrusted with the task of providing preventive medicine to culling teams working in Maranga and adjoining areas.