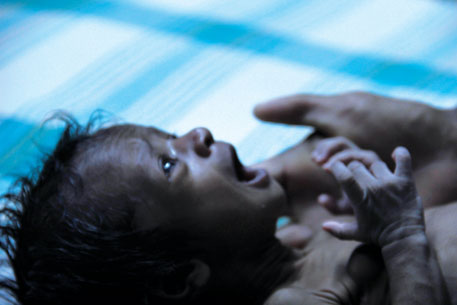 AFTER making news for prevalence of high levels of malnourishment, India is again in the spotlight for having the highest number of children dying right after birth in a year. The country accounts for 29 per cent of all first day deaths globally—309,000. Worse, the number of mothers dying on the first day of child birth is also the highest at 56,000, according to an annual report by global NGO Save the Children.

“The first day is the riskiest period in life. The two common reasons are inability to breathe and immature body,” says Vinod Paul, head of the department of paediatrics at AIIMS, adding, “the most common reason for maternal mortality in India is bleeding.”

Nearly 99 per cent of deaths on the first day of birth happen in the developing world. Of the one per cent in the industrialised world, the US has the most first-day deaths, says the report, ‘State of the World’s Mothers’, on 186 countries.

When it comes to the developing world, South Asia is the riskiest place to be born in after Africa. Of the one million children who die on the day of their birth each year, almost 40 per cent of them are in India, Pakistan and Bangladesh, says the report which blames chronic malnourishment of mothers for fatalities in the region. Malnourishment leads to physical impairment or stunting. 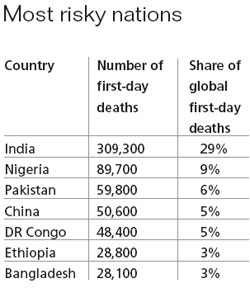 In Bangladesh, India and Nepal, 12 to 13 per cent of all women are stunted, putting them at higher risk during delivery and of having low weight children. Only 43 per cent women deliver in a health facility in South Asia, which is worse than sub-Saharan Africa where the figure is 46 per cent.

Preterm birth is another cause in South Asia. An average of 13.3 per cent of all live births are preterm, the highest regional rate in the world.

The news is worrisome for India because many countries in South Asia have made considerable progress in containing neo-natal mortality. Bangladesh reduced its newborn mortality by 49 per cent since 1990 with efforts like community health workers reaching mothers and babies at home, and training birth attendants and medical staff to use resuscitation device to help babies breathe. Nepal has brought down its newborn mortality by 47 per cent since 1990 using community-based care and low-cost antiseptic chlorhexidine to prevent umbilical cord infection.

To look after newborns, the government is opening Neonatal Intensive Care Units in each of the country’s 600 districts, says Jagdish Prasad, director general of health services, ministry of health and family welfare. “Wherever a woman delivers, there should be preparedness for complications,” says Rajiv Tandon, senior adviser, health, Save the Children. He appreciated the government’s move to allow auxilliary nurse midwifes (ANMs) to prescribe gentamicin, an antibiotic to treat sepsis. “Last month the government approved proposal that besides doctors, ANMs can also give gentamicin to children. Infection is a leading cause of newborn deaths, this is a right step,” says Tandon.