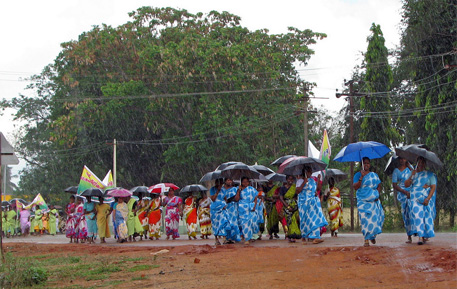 In the past three years, nearly 700 million adults became part of financial inclusion services around the world, according to a World Bank report. This reduced the number of unbanked individuals to 2 billion from 5.3 billion.

Financial inclusion is measured by Global Findex, a World Bank agency, as having an account that allows adults to store money and make or receive electronic payments. It is critical to ending global poverty.

The findings were published in the latest edition of the agency’s publication.

“Access to financial services can serve as a bridge out of poverty. We have set a hugely ambitious goal —universal financial access by 2020—and now we have evidence that we’re making major progress,” said World Bank Group President Jim Yong Kim.

The report says that around 700 million people either became account holders in banks or other financial institutions or had access to mobile money service providers or both between 2011 and 2014.

However, the report did not take into account India’s effort to financially include 130 million people last year. The country’s effort started in August 2014 and went on till January 26, 2015. It will be considered in the next report.

When asked about target 2020 for achieving financial access for all, Kim said, “This effort will require many partners—credit card companies, banks, microcredit institutions, the United Nations, foundations and community leaders. But we can do it, and the payoff will be millions of people lifted out of poverty.”

According to the report, the percentage of adults having an account increased from 51 per cent to 62 per cent between 2011 and 2014. This trend was driven by an 11 percentage point rise in account ownership in developing countries and the role of technology.

The report lays emphasis on the importance of financial inclusion, stating that broader access to and participation in the financial system, can actually boost jobs, increase investments in education sector and directly help the poor manage risk and absorb financial shocks.

Gender gap in South Asia
The report does not paint a rosy picture of South Asia as the region witnessed the largest ever gender gap in financial inclusion. Around 37 per cent women in this part of the world hold bank accounts as compared to 55 per cent men. With 18 percentage point gap between genders, it is the highest gap in the world.

More than half of the adults in 40 per cent of the poorest households in developing countries were still without bank accounts in 2014.

The Findex report says there is still lot to be done to expand financial inclusion among women and the poor.

The Global Findex Database 2014 - Measuring financial inclusion around the world