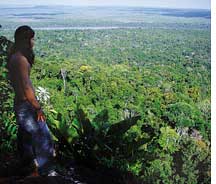 Ecosystems of the Iwokrama rainforest reserve in Guyana have been sold off. A uk -based private equity firm, Canopy Capital, has purchased the rights to environmental services generated by the 371,000-hectare tropical forest. In return, the firm has guaranteed a "meaningful contribution" to the forest's running costs for five years.

Though value of the deal is yet to be disclosed, director of Canopy Capital, Hylton Murray-Philipson, says the funds will be used to provide livelihoods for the 7,000 indigenous people dependent on the reserve and to help support the rainforest's conservation.

Iwokrama, which means 'place of refuge' in the Makushi language, is home to some of the world's most endangered species, including jaguar, giant river otter, anaconda and giant anteater. In November 2007, Guyana's president Bharrat Jagdeo put the country's forests up for adoption in exchange for development aid. Eighty per cent of the country's land is covered by rainforests. Unlike Brazil and Indonesia, logging in Guyana is selective. According to the un Food and Agriculture Organization, there was no deforestation in Guyana between 2000 and 2005.

The deal is precedent-setting in that it has opened the way for investors to put a value on ecosystem services--including rainfall generation, biodiversity maintenance, water storage, carbon sequestration and climate regulation--rendered by forests.

Murray-Philipson reckons the forests are worth about us $20 per hectare but says the price tag is considerably less than what some companies are considering paying to store carbon under the sea.