Indian scientists design a bike engine that runs on air 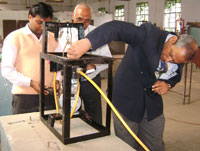 STUDENTS at SMS Institute of Technology in Lucknow are desperately waiting for mechanical engineering professor Bharat Raj Singh—to see his motorbike that runs on air. Fondly called hawai (airy) professor, Singh has built the engine and is working on the bike design with Onkar Singh, mechanical engineering professor at Harcourt Butler Technological Institute, Kanpur. The engine is a breakthrough in clean technology innovations; it uses the readily available air to generate energy and does not pollute. What is more, a motorbike powered with the air-engine can run at 70-80 km per hour and cover 40 km just for Rs 5. “Our effort was to create an engine as efficient as conventional bike but without the adverse effects of its internal combustion engine,” said Raj Singh. The professor duo has applied for a patent for the technology.

The engine has two components: an air tank and a turbine. Air is tightly filled in the tank using electricity or by pedalling. When required, the compressed air is passed through an inlet port to the turbine, where it impinges on the turbine vane and creates a rotational force, or torque. The rotational force is used to drive the bike, while the spent air is released to the atmosphere, explained the professors who did not wish to divulge the details. 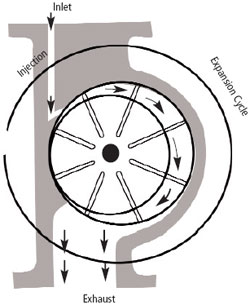 But the compressed air can exert different rotational force depending on the angle at which it sets the vane in motion. To find the optimum force, the professor duo took the help of a mathematical model. The engine is at its best when the turbine has 10 vanes at an angle of 36o each and the compressed air is injected at an angle of 60o on the vane, they noted in the Journal of Renewable and Sustainable Energy on May 6.

“The air-engine is 70-90 per cent efficient,” said Raj Singh. Internal combustion engines used in fossil fuel-powered bikes are 18-20 per cent efficient. It may, however, take them another four to six months to develop a vehicle that could be put to commercial use. The challenge lies in the size of the air tank that are big to be fitted to bikes. The engine, in its present design for lab-testing, holds 20 bar of air pressure, sufficient to be used for 30-40 minutes or run 30 km. “We are trying to use a fibre tank that can sustain up to 300 bar air pressure so that the bike can run five to six hours or 200 to 250 km in a single fill,” Raj Singh said. This would be light and can be easily fitted to motorbikes.

The duo are optimistic about the technology, especially for two-wheelers. In India 77.8 per cent of vehicles are bikes. But is not developing an air-engine common in engineering colleges? In 2009, four students of Guru Nanak Dev Polytechnic College in Punjab developed an air-engine. It had three air tanks, weighing about 180 kg, and could give a maximum speed of 18 km per hour. “It could not give much speed because the air-tanks were made of steel and hence were heavy,” said Jagraj Singh Kaul, head of the automobile department in the college. The students wanted to replace them with carbon fibre tanks, but could not because of monetary constraints, Kaul added. A similar air-engine has also been developed by engineering students in Ferozepore.

Raj Singh clarified, “The students’ air-bikes are modified versions of the existing engine of conventional bikes. We have developed an engine that uses turbine and is based on a principle and mathematical calculations.”