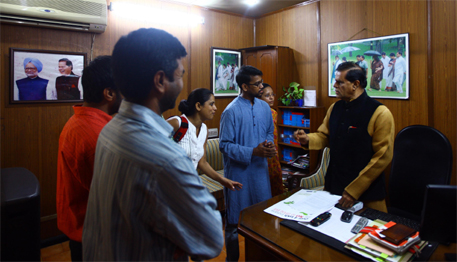 Members of Coalition for GM Free India on Friday submitted petitions signed by over 400,000 people to the parliamentary committee of science and technology which is deliberating on the biotechnology Bill.

The petitions demanding withdrawal of the Biotechnology Regulatory Authority of India (BRAI) Bill was handed over to T Subbarami Reddy, chairperson of the Parliamentary committee, on the eve of expiry of deadline for public feedback on the proposed law.

It is meant to regulate and monitor biotechnology in the country. The last date for receiving public comments on the Bill is Sunday, August 25.

The standing committee is currently reviewing the controversial BRAI Bill, 2013, which was introduced by the Ministry of Science & Technology in spite of opposition both inside and outside Parliament. While accepting the petitions, Reddy assured the delegation that the standing committee will keep these public concerns in mind while deliberating on the Bill.

The BRAI Bill, 2013, proposes to set up a single window clearance mechanism for contentious genetically modified crops into the country.

Renu Singh, member of the Coalition for a GM Free India, said the law “is designed to lower the regulatory bar to give a free hand to biotech giants like Monsanto to push in their GM crops and take control of our seeds, farming and food. It is nothing but a ‘Monsanto Protection and Promotion Act’.”

NGOs and activists have said the Bill is biased, unscientific and non-transparent in dealing with regulation of genetically modified crops. The Bill comes at a time when there is mounting scientific evidence on their adverse impact on human health, environment and farm livelihoods, they added.

“This Bill is an attempt to circumvent public opposition to GM crops in the country,” said Deb Kumar Chattopadhyay, a Greenpeace India activist. “While the govt failed us, we have great hopes that the parliamentary committee comprising MPs from various political parties will pay heed to the voice of citizens.”