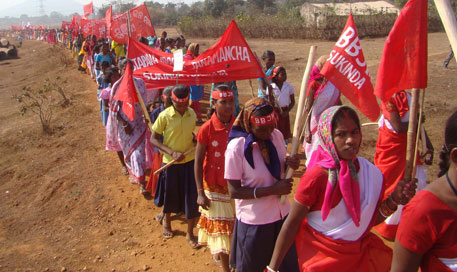 Around 5,000 tribal people and their supporters held a rally on Thursday in Kalinga Nagar, the steel hub of Jajpur district of Odisha, to mark the eighth anniversary of the killing of 14 tribals, including three women, in police firing while they were protesting against Tata' s steel project. Those who participated in the rally vowed not to cede even an inch of land to any industry. The anti-industry groups, under the banner of Bisthapan Birodhi Janamanch (BBJM), assembled at Ambagadia where the firing incident took place.

On January 2, 2006, police had fired on tribals protesting against forcible  displacement because of the construction of a boundary wall by Tata Steel for its six million tonnes capacity steel plant in the industrial hub.

People leading agitations against forcible land acquisition in other parts of Odisha participated in a rally from the “martyrs column" in Champakoila village to the Veerbhumi in Ambagadia, where the victims were cremated eight years ago.

A large number of people paid tribute to the tribal “martyrs”. Earlier in the day, family members and relatives of the victims of police firing offered flowers and oil in a ritual called diridulsunum.

“My brother Bhagawan Soy (27) of Gobaraghati village was gunned down by the police. I always remember my brother who sacrificed his life to protect our land,” said Lalmohan.

Shyamasundar Barala of Gobaraghati, who lost his brother Sudam in the incident, said:  “I will not allow anybody to acquire my land.”

Prafulla Samantray, president of people's front Lokshakti Abhijan, while addressing the gathering alleged that even after eight years of the police firing incident, the government has failed to wipe away the tears of the tribal people. He criticised Chief Minister Naveen Patnaik, accusing him of favouring industrialists at the expense of the common man.

"Bhalachandra Sarangi, a leader of CPIML (New Democracy), said in the meeting that acquisition of land is not only affecting the financial condition of the locals, but also robbing them of their only means of survival. Apart from victimisation of the local people, the income levels of the affected families will also go down as they will be displaced from traditional occupations. He accused Patnaik of dislike for tribal people which is apparent from the fact that he did not even bother to visit Kalinga Nagar, leave alone address the grievances of the tribals displaced by industrialists. Odisha has about 97 per cent of  chromite reserves, 71 per cent bauxite reserves, 33 per cent of the iron and 32 per cent of the manganese resources of India. As commodity prices soar, international companies are eyeing this mineral bounty, much of which is beneath tribal territory, activists said.

"We won't tolerate any torture of innocent tribals. There shouldn't be any industry at the cost of tribals and their livelihood. Our fight against industrialisation will continue till the government changes its decision to set up industries on farm land. Fourteen of our fellow men sacrificed their lives for tribal cause. We are ready to die en masse, but will not spare even an inch of land for industry," said Rabindra Jarika, secretary of BBJM, at the meeting.

Globalization, displacement and the livelihood issues of tribal and agriculture dependent poor people