60 quintals of flowers sold every day at Kumbh

Most of it ends up in the river bed 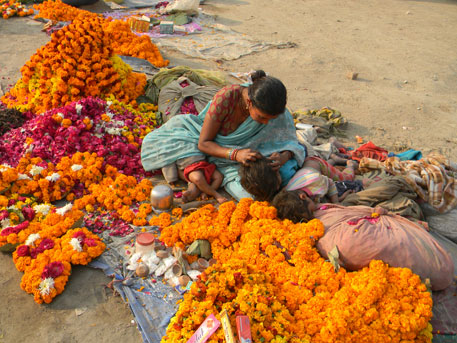 About 60 quintals of flowers are being used every day by millions of godmen and pilgrims who have gathered to take a dip in Sangam, the confluence of the Ganga, and the Yamuna rivers during Maha Kumbh 2013.

The demand for flowers goes up during main bathing dates when the sadhus arrive at the bathing ghat from their camps in chariots decorated with flowers and Naga sadhus cover themselves in flowers during the parade. The ritual of the Ganga puja also involves offering flowers to the river. Most of the flowers end up either in the river bed or garbage dumps by the end of the day.

The farmers of Benares, Moradabad and Mirzapur had sent such large quantities of flowers that just before Makar Sankranti on January 14, the prices of marigold fell steeply from Rs 25 to Rs 10 per kg. Some of the farmers even kept flowers in cold storage in hope of prices going up later. However, from January 14 the rates fluctuated and the flower is being sold at Rs 30 a kg. Benares alone is supplying 30-40 quintals of flowers. The demand is set to rise with the Shahi Snan of Mauni Amawasya day on February 10. If need be, flowers could also be brought from West Bengal.

Flowers like rose, jasmine, crossandra, chrysanthemum, champak, tuberose, marigold and aster are grown commercially over large areas in Uttar Pradesh. Jasmine in Saunpur (Uttar Pradesh) is even exported to France.

Traders in Rambag flower market in Allahabad have been busy like never before. “Flower cultivators have been waiting for Kumbh. Such mega events are very good for our business. The cultivators too get to benefit out of over-production,” said Ramlal Srivastava, an agent handling flowers from three villages of Moradabad.