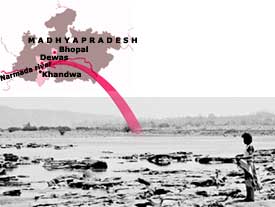 At around 9.30 pm on April 7, 2005, 68 pilgrims were killed while taking a holy dip in river Narmada at Dharaji village in Madhya Pradesh's (mp's) Dewas district on the occasion of Bhootdi Amavasya mela (fair). Forty people are still missing. The reason: the Indira Sagar Dam, located 25 kilometres upstream in Khandwa, had released water at 6.45 pm and the victims didn't know about it. Neither did the district authority, claims R K Choudhary, the then superintendent of police, Dewas. The Narmada Hydroelectric Development Corporation (nhdc), which administers the dam in collaboration with the state government, doesn't counter the allegation . Raising pertinent questions about the administration of large-scale hydropower projects and their accountability, it simply argues that a dam administration isn't responsible for everything that happens downstream.

Choudhary alleges: "The dam authorities decided to release water suddenly, without any warning. People were being cautioned, using loudspeakers, to not go into deep waters but we didn't know about the water release." This, when the then district magistrate (dm), Ashish Shrivastava, had informed the dam authority about the fair. But M S Markam, the then additional district magistrate, indicates otherwise, saying the dam had been releasing water at the same time everyday for the past four months. Kesar Singh, a villager, also says one loudspeaker was announcing that the water would rise at night. But nothing could be heard over the noise of the drums. A few more loudspeakers might have saved several lives. Choudhary, Shrivastava and Markam were transferred after the incident, while two sub divisional officers were suspended.

Dewas' administration lodged a criminal complaint against nhdc. But nhdc's chief executive director S K Dodeja pleads not guilty: "We have constructed a dam. We generate electricity according to the schedule given to us by the state electricity board's State Load Dispatch Centre (sldc). We aren't responsible for anything else." He says nhdc didn't need to inform people downstream when it first started releasing water in January 2004. "Our dam operates out of Khandwa and the incident occurred in Dewas, a separate district. Narmada is a long river. How can we be held responsible for everything happening downstream?" Dodeja points out that Dewas district authority had informed nhdc about the fair in 2004 and so water was not released on that particular day. This wasn't done this year. On its own, the dam authority didn't feel the need to keep track of the local event. "Festivals follow the lunar calendar. We don't have information related to such cultural events," he says.

The Central Water Commission (cwc) also has no accountability rules for dams releasing water. "The rules and regulations for hydropower projects are localised. They are drafted by individual projects, as each one is unique," explains M E Haque, commissioner, Union ministry of water resources. Though the manual of the Indira Sagar dam's rules and regulations is still being drafted, the dam is already in operation.

Mismanagement also existed at other levels. For an unprecedented turnout of 300,000 pilgrims this year, only 48 police personnel were deployed to maintain law and order. They too had other pressing concerns. "Most were busy collecting bribes from bus drivers who brought the pilgrims," says Singh. The mishap added another dimension to the importance of the fair, the last of its kind. The entire area will be submerged after the Omkareshwar Dam on river Narmada is completed in early 2006. Does this event signal a greater tragedy in store?