80% chance of drought in north-west, 75% in central India, says Skymet 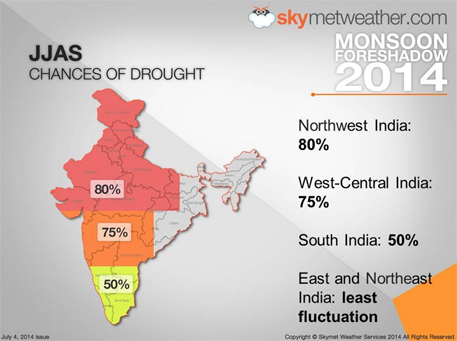 Private weather forecaster Skymet on Friday lowered its forecast for the monsoon rain and raised the probability of drought. The rainfall forecast has been reduced to 91 per cent of average rainfall of last 50 years against earlier projection of 94 per cent.

The figure, if in the range of 96-104 per cent, is considered normal. The chances of normal rain have been reduced from 34 per cent to 10 per cent.

“The odds of a drought are 60 per cent now, compared with 25 percent in April,” Skymet’s chief executive Jatin Singh said in New Delhi on Friday. The worst chance of drought is expected to be felt in the northwest India at 80 per cent, followed by central India at 75 per cent and south at 50 per cent.

“Monsoon remains in India from June to September, of which August is expected to be the best,” according to Skymet.

India received scantiest of rainfall in June in five years. The rainfall was 42 per cent below normal, making it the worst first month since 2009 and one of the worst in 100 years.

The weak start to this year’s monsoon has already pushed the new government to take rapid steps including raids against hoarders and work on contingency plans. The weather agency has predicted that the country may get 98 per cent of average rainfall this month. July is a crucial month for sowing summer crops, and the timing, distribution and volume of monsoon rains are important for the planting of crops such as rice, oilseed, sugar cane and cotton. The ongoing crisis in Iraq and the speculations over increasing prices of oil in international market has sparked inflation fears.

Also read: Pray before you sow

The forecaster has also predicted a rise in El Niño conditions that are caused by the periodic warming of the tropical Pacific, is associated with warmer-than-average years in South Asia. Australia’s Bureau of Meteorology had earlier this week said that all climate models indicated an El Niño likely to develop around September, and there was a 70 per cent chance of the pattern this year. Skymet experts said that although El Niño reaches its peak in December-January, it is already affecting the Indian monsoon.

“It’s not the only factor, but the biggest factor contributing to the weak monsoon this year is definitely El Niño which has consistently grown stronger,” said Jatin Singh, chief executive of Skymet.